Stanislav Balabanov, of Slavi Trifonov’s party – the second-largest group in the new National Assembly – said that if the party had the opportunity to form a government, it would come up with “a real headquarters with real professionals”.

“An abdominal surgeon cannot, with all due respect, manage a pandemic,” he said, in an apparent reference to Major-General Ventsislav Mutafchiyski, who headed the response staff from the time it was set up in February 2020.

Balabanov said that it had been high time to shut down the response staff because such a body should be “made up of professionals, not people carrying out political orders”.

In a declaration read in the National Assembly by Georgi Mihailov, the BSP said that the disbanding of the response staff raised questions and moreover, fears in people.

The BSP said that there was no doubt that there were shortcomings in the management of the health crisis by the response staff and many unnecessary fears and contradictory opinions had been created in society.

“But leaving the country without a crisis management at the moment and without a clear idea of ​how the activities of this headquarters will be reported raises many unpleasant questions and arouses even more fears in people,” the party said.

After Parliament’s health committee is constituted, it should investigate various aspects of the work of the response staff, the BSP said.

Dr Dzhevdet Chakurov of the Movement for Rights and Freedoms said that there was no motivation to shut down the response staff.

He said that an alternative to the body should be considered. “The situation is serious, there must be an operational body to coordinate actions and continue the fight against this pandemic,” Chakurov said.

Dr Alexander Simidchiev of Democratic Bulgaria said that as a doctor, he was surprised by the decision.

“Every day that we do not have an administration is a risk to the population and human health,” said Simidchiev, who described the decision to disband the response staff as irresponsible.

The government, even if outgoing, must continue to work. “We currently have a medical crisis and its management requires effective bodies to manage this process,” Simidchiev said.

Maya Manolova of the “Rise Up! Mobsters Out!” group said that a new body should be set up, made up of people with proven expertise, boldness, and ready to stand up for decisions to protect public health, rather than retreat “whenever Borissov gnashes his teeth”.

Health Minister Kostadin Angelov, addressing the National Assembly, said: “I doubt you have read the laws. The Minister of Health is responsible for managing the crisis, not the national operational headquarters. The measures are proposed by the Chief State Health Inspector”.

He criticised Deputy Speaker Tatyana Doncheva for not wearing her mask properly and thanked Nikolai Hadzhigenov – of Trifonov’s party – for wearing one. In 2020, Trifonov was vocal in denying that there was a pandemic and has criticised the anti-epidemic measures as impinging on people’s freedom.

“The election campaign is over,” Angelov said. “During this campaign some of you explained that there is no such pandemic, called the doctors criminals and now I am embarrassed as a minister,” he said. 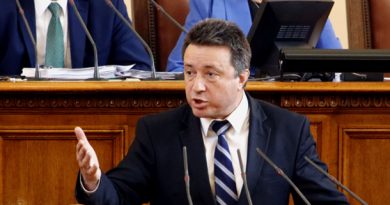