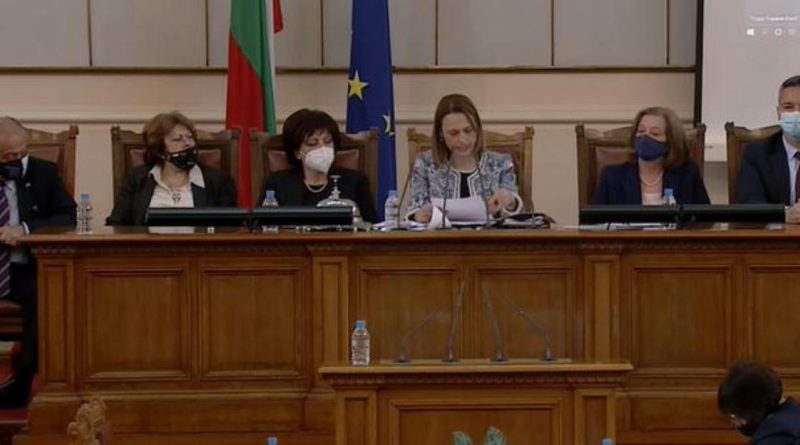 Bulgaria’s 45th National Assembly held its first sitting on April 15, eleven days after being elected, and voted into office a Speaker from Slavi Trifonov’s political party.

The four-hour sitting was addressed by President Roumen Radev and by representatives of the six parliamentary groups, before proceeding to the election of a Speaker and Deputy Speakers.

As is practice in the Bulgarian Parliament, before the election of a Speaker, the sitting was presided over by its oldest member: Mika Zaikova, 79, of Trifonov’s party.

Processes of voting took time because the sitting was held in the old National Assembly building, from which the electronic voting system had been removed to the new chamber that came into use in 2020.

MPs voted to allow members in quarantine or isolation to participate via video link. This made it possible for Trifonov and four other MPs in quarantine to be sworn in.

Radev used his address to criticise Boiko Borissov’s government and to announce that on April 19 he would begin consultations with parliamentary groups on the process of forming a government.

There was enthusiastic applause in the House from all but Borissov’s GERB group when Zaikova announced that Borissov had formally tabled the resignation of his government.

She said that it was shameful that Borissov had absented himself from the sitting.

Many of the current GERB members of the Cabinet are now MPs.

Borissov’s government will continue in office in an acting capacity pending either the election of a new government or, if that does not happen, the appointment by Radev of a caretaker cabinet.

Dessislava Atanassova, who has replaced Daniela Daritkova as head of the parliamentary group of GERB, said that there was only one winner of the April 4 parliamentary election, and that was GERB.

“At least you should admit it,” Atanassova said, referring to the fact that GERB won the largest share of votes.

In her address, she dwelt at length at what she presented as achievements of the years of GERB’s rule, such as motorways and increasing teachers’ salaries.

She confirmed that GERB would propose a government.

On Facebook, Borissov said that GERB would table legislation to introduce a majoritarian electoral system. This previously was campaigned for by Trifonov, though his party announced on April 15 that it now rejected the idea.

Trifonov, who is said to have tested positive for Covid-19, did not address the House. Instead, the deputy leader of Trifonov’s party, Toshko Yordanov, did so, in a speech by far briefer than the lengthy addresses by other party representatives. Later in proceedings, it was announced that Yordanov would head the parliamentary group, with three deputy leaders. Trifonov will not be part of the parliamentary leadership of his party.

Yordanov said that this Parliament was unlikely to serve its full four-year term.

He said that Trifonov’s party would table legislation to amend the Electoral Code, including abolishing the limitation on the number of polling stations outside Bulgaria, providing for video monitoring of ballot-counting, and a new Central Election Commission. The party also would table legislation to cut state subsidies for parties in Parliament to one lev per vote.

Bulgarian Socialist Party leader Kornelia Ninova said that her party would not support a government nominated by GERB but would support one nominated by Trifonov.

Movement for Rights and Freedoms leader Mustafa Karadayi said that the party would not vote for a government that did not have a clear agenda.

Ivanov said that DB was collecting signatures to amend the constitution to make the Prosecutor-General subject to democratic accountability, and would table amendments to the law on the anti-corruption commission that would lead to current head Sotir Tsatsarov being ousted.

Maya Manolova, parliamentary leader of the “Rise Up! Mobsters Out” coalition, said that the group would table a resolution to audit the “corrupt government”.

“We will show the people all the dirty secrets and abuses of power and hand them (Borissov’s government) over to justice,” she said.

Manolova said the group wanted electoral reform, to be ready for early elections.

“We will introduce fully machine voting, remote electronic voting for Bulgarians abroad, we will introduce a constituency for our compatriots abroad. We will clear up the voters’ roll through active registration. We will change the composition of election commissions,” Manolova said.

“We will insist on a change in the Council for Electronic Media and leadership of (Bulgarian National Television), which through actions and inaction allowed manipulation of public opinion during the election campaign,” she said.

In the election of a Speaker, Iva Miteva defeated GERB candidate and former Speaker Tsveta Karayancheva.

A total of 163 MPs from all groups except GERB voted for Miteva, while GERB abstained.

Miteva, a lawyer, was for several years director of the Bulgarian parliament’s EU legislative directorate. She was closely involved in the preparation of proposed changes to the constitution and electoral laws.

Bulgarian parliamentary practice is to have a Deputy Speaker from each parliamentary group. The nominees were presented as a package and the vote was unanimous. 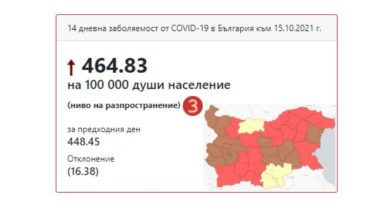