There is an encouraging trend in Bulgaria regarding Covid-19 and a decrease in the rate of the number of people infected is expected, Chief State Health Inspector Associate Professor Angel Kunchev said on August 11.

Kunchev was speaking after visiting the district of Dobrich along with Bulgaria’s Health Minister Kostadin Angelov.

The visit was prompted by the significant increase recently in cases in Dobrich. Angelov said that the management of the hospital in the town would be changed because, instead of helping to manage the crisis, it was aggravating it with poor organisation of work.

Kunchev said that in the past three weeks, Bulgaria had reached a plateau of about 1500 newly-confirmed cases a week.

In an update on August 12, Bulgaria’s national information system said that the number of newly-confirmed cases of new coronavirus was 210, following 5388 PCR tests in the past 24 hours.

To date, 313 866 PCR tests have been done in Bulgaria, according to the national information system.

Of the newly-confirmed cases, by district, 24 are in Blagoevgrad, five in Bourgas, 14 in Varna, four in Veliko Turnovo, one in Gabrovo, 17 in Dobrich, three in Kyustendil, two in Lovech, nine in Pazardzhik, three in Pernik, five in Pleven, 31 in Plovdiv, one in Razgrad, three in Silistra, two in Sliven, one in Smolyan, two in the district of Sofia and 59 in the city of Sofia, 11 in Stara Zagora, two in Turgovishte, two in Haskovo, four in Shoumen and four in Yambol.

The number of active cases is 5097. This is an increase of 24 compared with the number reported 24 hours earlier.

The number of patients in hospital is 861, an increase of seven in the past day. Sixty-four are in intensive care, 10 more than the figure reported 24 hours earlier.

The number of patients who have recovered has risen by 174 to a total of 8154.

The death toll in Bulgaria of patients who had tested positive for Covid-19 has risen by 12 in the past day, to a total of 471, according to the national information system. 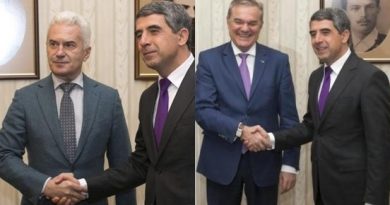