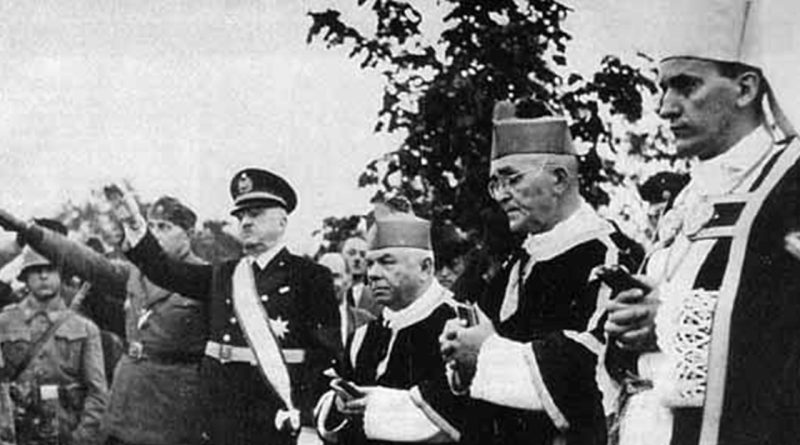 On June 26, The Independent published an op-ed written by Professor Menachem Rosensaft, general counsel of the World Jewish Congress, which outlines the current situation considering memory politics on the Second World War in Croatia.

The article, titled “Croatia’s fascist movement is on the rise yet again” gives the background on Croatian Second World War fascist Ustaša movement, and genocide they committed against Serbs, Roma, Jews, as well as massive violence against anti-fascists.

Professor Rosensaft singled out the latest developments in Croatia’s highly problematic relation towards Second World War fascist Ustaša, as well as the lack of legislation for prosecuting the proliferation of Ustaša symbols. One of these developments is a highly controversial verdict of the Court of High Misdemeanours in Zagreb, claiming that the use of Ustaša chant “Za dom spremni” (“Ready for the Home(land)”) in a song by nationalist singer Marko Perković Thompson did not violate public order and breach the peace.

This decision will probably encourage future transgressors, as there is a problematic track record in prosecuting or even condemning the widespread use of the chant. The article explains how Croatia deals with the Ustaša past by promoting rampant negationist theories, capillary working through film, journalism, and quasi-academic work. Finally, Professor Rosensaft countered this negationism with testimonies of Jasenovac concentration camp survivors.

The publication of the article coincided with the peak of the campaign for Croatian parliamentary elections. While usually historical topics are an important part of Croatian political debates – traditionally known as the “Ustaša and [anti-fascist] Partisans” divide – this campaign was mostly oriented towards other issues, such as the Covid-19 pandemic and its consequences. However, during the campaign, right-winger turned their focus on abortion rights and the position of Serbs but did not enter the already chartered waters of denying the genocide Ustaša committed against them.

Such a campaign was probably one of the reasons why the republication of Professor Rosensaft’s article in the Croatian media was extremely scarce.

Out of mainstream media, only weeklies Nacional and Novosti, and daily Slobodna Dalmacija republished the partial translation of the article. In general, Novosti, as a left-leaning anti-establishment weekly of the Serbian national minority, traditionally covering how Croatia deals with the Ustaša past. People generally see Novosti as a weekly going against the current, provoking the public to reflect on issues relating to dealing with the past.

Globus, not as much anti-establishment as Novosti, occasionally covers the topic of historical revisionism, Holocaust denial and distortion. Although a more conservative newspaper, Slobodna Dalmacija published the news about the open-ed, with author Davor Krile – seen as commentator going against editorial policies of the daily – stressing how the court decision on “Za dom spremni” echoed across the globe. Two smaller independent media also republished the article – Autograf and Radio Gornji Grad – as well as the far-right news portal Priznajem.hr.

As expected, a lot of Serbian media republished the translation of the article. Mostly under the title “The Rehabilitation of Ustaša in Croatia”, the story was republished by state-owned Tanjug, then Politika, Telegraf, Radio-Television Vojvodina and a few other regional, alternative and smaller media hubs – Abras media, Preokret, to name a few.

Documentation-Information Centre Veritas, a Belgrade-based organisation gathering Serbs who once lived in the unrecognised statelet Republic of Serbian Krajina in Croatia, republished the full version of the article in English.

In this case, as in others, Serbian media regularly share news regarding Croatia’s problematic relation to Ustaša past, as it feeds into the Serbian nationalist narrative of Croatia as a reborn Independent State of Croatia (NDH).

Such an approach is visible when the same media do not report or downplay events relating to the legacy of Serbian Second World War collaborators or the ultra-nationalist Četnik movement. As a years-long journalist for Balkan Insight, I can attest to how some news about the rehabilitation of Ustaša was covered in mainstream Serbian media.

In contrast, Serbian media would ignore or reframe news about the rehabilitation of the Četnik movement, so it fits the nationalist discourse. I was often personally utterly disgusted how people and media in Serbia would share my stories of Ustaša rehabilitation, while at the same time deny the genocide committed in Srebrenica. Some Serbian media, often independent and anti-establishment, regularly report on transgressions in dealing with the fascist legacy in both Serbia and Croatia.

Bosnian media republished the translation of the article, which is usually not the case when it comes to topics of Croatia’s Ustaša legacy. While the republication by BN Television – broadcasting from Bijeljina in Republika Srpska – comes as no surprise, mainstream media from the Federation of Bosnia and Herzegovina, such as Vijest.ba, Klix.ba, Dnevni Avaz, Al Jazeera, Index.ba and some regional portals reported as well, which shows new interest for the topic.

The fact that also Bosnian right-wing portals, such as ArmijaRBIH.com and Bosniaks.info, republished the story shows how the relevance of the story surpassed mainstream media.

The holy mass held for Ustaša and other victims of Bleiburg in the Roman Catholic cathedral in Sarajevo in May is probably one of the reasons for such a vibrant interest in the topic. To a degree, one can argue that Bosnian right-wing media are using articles like this for framing their agenda against Croat nationalists.

But, why was the article so poorly republished in the mainstream Croatian media? The first reason might be the timing, as the story came at the height of the election campaign, which was untraditionally free of historical topics. This topic was last discussed in Croatian mainstream media at large after the court published the decision on “Za dom spremni”.

However, one might argue that the omission of the story in some media is a more deliberate and planned editorial decision. Some mainstream media are either under control or close to the governing Croatian Democratic Union (HDZ): daily Večernji list, media hub Hanza Media (weekly Globus, dailies Jutarnji list and Slobodna Dalmacija), public Croatian Reporting News Agency (HINA) and public broadcaster Croatian Radio-Television (HRT).

For years, international institutions and domestic media organisations criticised the HDZ-led government for its attempts to control the media, purging it of journalists and editors with professional integrity. Since 2016, HRT was turned into a sort of government and HDZ-praising propaganda machine, downplaying government scandals and giving disproportional representation to government and HDZ officials in comparison to those from the opposition.

HRT was purged of many professionals and replaced with ultra-conservatives prone to promoting the agenda of the most nationalist cliques within the Croatian Catholic Church. HRT took an active role in giving them space to promoters of negationist theories about Jasenovac, distorting the Holocaust (Shoah) and denying the genocide over Serbs, while promoting fabrications of post-WWII Communist camp in Jasenovac.

In this aspect, it may be that these media are trying to silence the criticism of Professor Rosensaft’s article, as they try to focus all public attention on government’s successful handling of the Covid-19 pandemic. The article would be a yet another reminder of how unsuccessful HDZ’s government was in their memory politics, starting from the scandal over the plaque with “Za dom spremni” in Jasenovac, over state-sponsored burials of Ustaša soldiers to the already mentioned court decision. Additionally, the criticism coming from abroad is even more problematic for the government, as it cannot be labelled as opposition criticism.

An additional reason why Professor Rosensaft’s criticism is potentially explosive is a fact that he represents an international Jewish organisation. While criticism coming from Serbian organisations is often ignored because it allegedly promotes Serbian nationalism, Croatian government and politicians are often walking on egg shelves when similar criticism comes from Jewish organisations, Israel and the US.

Even the most vile deniers or sympathisers of Ustaša crimes will not deny the Shoah, but rather distort its memory in Croatia. Such an approach is especially present among Croatian politicians, who, since the times of first President Franjo Tuđman obsessed over establishing good relations with Israel.

Also, at the same time, Tuđman personally promoted Steven Spielberg’s The Schindler’s List, while the movie producer Branko Lustig became close to him.

Tuđman and Croatian nationalists pursued the picture of the Holocaust as portrayed by Hollywood, showing the Shoah as a solely German-led historical event, sanitised of all responsibility by junior perpetrators. Such memory of the Holocaust uses a common misinterpretation, according to which Ustaša unwillingly took part in the Holocaust under the pressure of Germany.

Even today, most of the Ustaša-sympathisers are strongly anti-Serb oriented, but at the same time Philosemitic and Zionist. Obsessions with Serbs as the Other, has its roots in the legacy of the 1990s war between Croatia and Croatian Serbs. At the same time, the Holocaust was not denied, but distorted, with a sanitised narrative that brushed off Ustaša’s role in it.

In 1995-96, Tuđman planned to turn Jasenovac into a memorial to all victims of the Second World War, even Ustaša soldiers. Again, while he ignored the domestic criticism, he grudgingly abandoned these plans under the pressure of the US and Israel. However, he continued to spread lies of Jasenovac working as a communist camp for Croats after 1945 – a lie which Croatian ambassador Miomir Žužul said in a speech in the US Holocaust Memorial Museum in 1996. Tuđman steered such a policy of commemorating the Holocaust, hoping to receive Israel’s call for a state visit.

Croatia continued these memory politics, giving respect to the Holocaust victims abroad while downplaying and silencing its memory in the country. There are clear examples of these.

While former Croatian President Kolinda Grabar Kitarović paid a visit to Yad Vashem in 2015, the same year and all through her term she did not visit the state ceremony in Jasenovac.

While she attended a conference in Israel dedicated to the Holocaust in January 2020, she missed all similar events dedicated to Ustaša crimes in Croatia.

While in 2015 and later she had some problematic statements over “Za dom spremni”, she condemned NDH during the visit of US State Department envoy for Holocaust issues, Nicholas Dean, in 2016.

In January 2020, Croatian Prime Minister Andrej Plenković opened a grand exhibition on Holocaust victims in Zagreb but again focused on the German role.

In 2019, Zagreb planned to build a memorial for the Holocaust victims, while omitting the role of Ustaša in implementing the genocide. The inscription was hiding the local Holocaust behind the total death toll in Europe – six million murdered Jews. The list goes on.

The far-right media usually republishes article like Professor Rosensaft’s, framed as an international conspiracy or pressure on Croatia’s independence. One of the reasons why they have shared this article is maybe a lack of knowledge that it was published, as most of the mainstream media ignored it.

Additionally, there is a possibility that the far-right media deliberately avoided republishing of the article because certain figures mentioned there, like Zlatko Hasanbegović, were standing for office in the elections, and maybe publicity like this is unwanted.

All in all, such a reception of articles critically approaching Croatia’s model of dealing with the past – based on deceptions, manipulations and hypocrisy – should have been expected.

Sven Milekić is a PhD scholar in the Department of History at Maynooth University and a journalist at Balkan Insight. 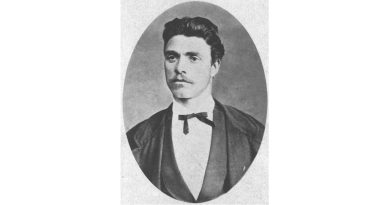