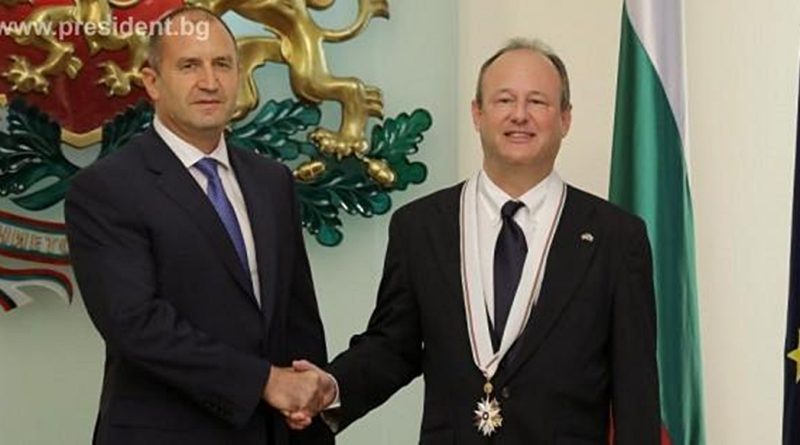 At a ceremony on June 10, Bulgaria’s highest state honour, the Stara Planina first degree, was conferred on outgoing United States ambassador Eric Rubin for his contribution to the development of Bulgarian-US relations.

Rubin, a career diplomat, has been ambassador to Bulgaria since 2016. His term in Sofia is coming to a close and he will become president of the American Foreign Service Association. The US Senate has approved his promotion.

Bulgarian President Roumen Radev, handing over the honour to Rubin, said that it was also an expression of the importance Bulgaria places on its strategic partnership with the US.

Radev said that Rubin had ensured that Bulgaria-US relations developed on an upward path, and in the sphere of defence and security, Rubin had brought new impetus to the relations between the two countries, with a special emphasis on the modernisation of the Bulgarian armed forces.

“During his term in office, the scope and intensity of bilateral exercises and exercises was expanded. There was also a strong link in the fight against terrorism,” Radev said.

Radev noted Rubin’s contribution to deepening trade and economic ties between Bulgaria and the US, saying that there had been a continuous and solid rise in bilateral trade in recent years. The President also praised Rubin’s interest in and in-depth knowledge of the Bulgarian language and history.

Rubin said that Bulgarian-US relations had strengthened, and with the help of the US, sectors of the economy with high added-value such as IT had been developed. Hundreds of companies have invested in Bulgaria in recent years, he said.

Rubin expressed his satisfaction with Bulgaria’s efforts to achieve energy independence and diversification. He noted the progress made in building long-term relationships in the areas of security, the fight against terrorism, migration and defence, and progress in interoperability, according to a statement by the President’s office.

He also highlighted the development of ties between the two peoples, exemplified by the more thanr 100 000 young Bulgarians who have completed summer internships in the United States.

It will not be easy to leave Bulgaria, he said, and said that he would return to the country because it is a second home for him.