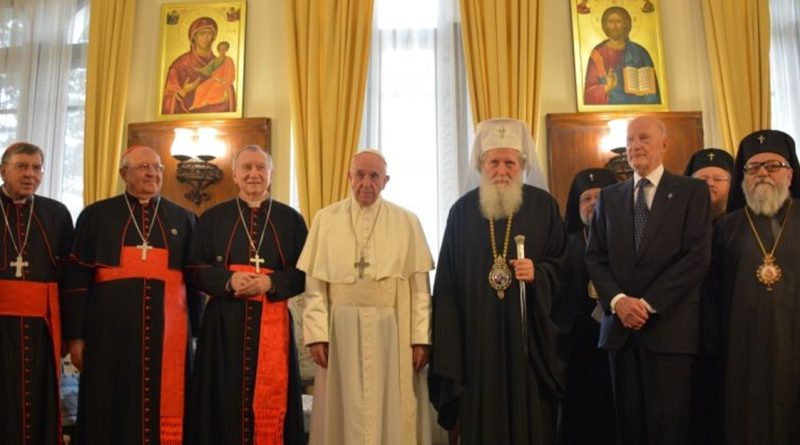 Pope Francis held talks with Patriarch Neofit and other leaders of the Bulgarian Orthodox Church at the Holy Synod headquarters in Sofia on May 5, with both church heads making references to the schism of centuries between the western and eastern Christian churches.

After the talks, the Holy Synod posted on its website the full text of formal remarks by Pope Francis and by Patriarch Neofit.

During the Pope’s visit to Bulgaria, this is his only formal contact with the leadership of the Bulgarian Orthodox Church. Earlier, the Holy Synod forbade its clergy from participating in joint prayers and liturgies with the head of the Roman Catholic church.

Neofit told Francis: “On behalf of the Holy Synod of the Bulgarian Orthodox Church – Bulgarian Patriarchate we welcome you and your companions. Welcome to the lands bearing the inheritance of the holy and pious Cyril and Methodius, St Prince Boris Mihail the Baptist, St Clement of Ohrid and many other saints of God, thanks to whose enlightenment in the ninth and 10th centuries, Christianity spread in Europe and beyond its borders”.

The Bulgarian Orthodox Church Patriarch noted that Pope John Paul II had visited Bulgaria in 2002 and “only 17 years later, you are the second Pope to come to Bulgaria, which we cannot explain except as a special attitude.

“Your desire to visit us in the Holy Synod is perceived as an expression of respect for the Bulgarian Orthodox Church. We assure you that the respect is mutual,” Neofit told Pope Francis.

Patriarch Neofit said that the Bulgarian church was glad to hear the strong words of Pope Francis in defending the Christian roots of Europe and warning of the dangers and physical persecution of Christians in their own countries. “On these issues, our views are the same,” Neofit said.

He said that John Paul II had regretted the continuing lack of full fellowship between the two churches.

“Let us say that here, in the throne of the Bulgarian state of Sofia, bearing the name of the Wisdom of God, we have always prayed for the unity of the world in Christ because united, Christians will be stronger.”

In a clear reference to the continuing schism, Neofit said: “The life of the Church is governed by our Lord Jesus Christ. If God has allowed something to happen, He knows why he has allowed it, and expects us to understand why. We, the Bulgarian Orthodox Church, are firmly convinced that, in terms of faith, compromises cannot and should not exist.” 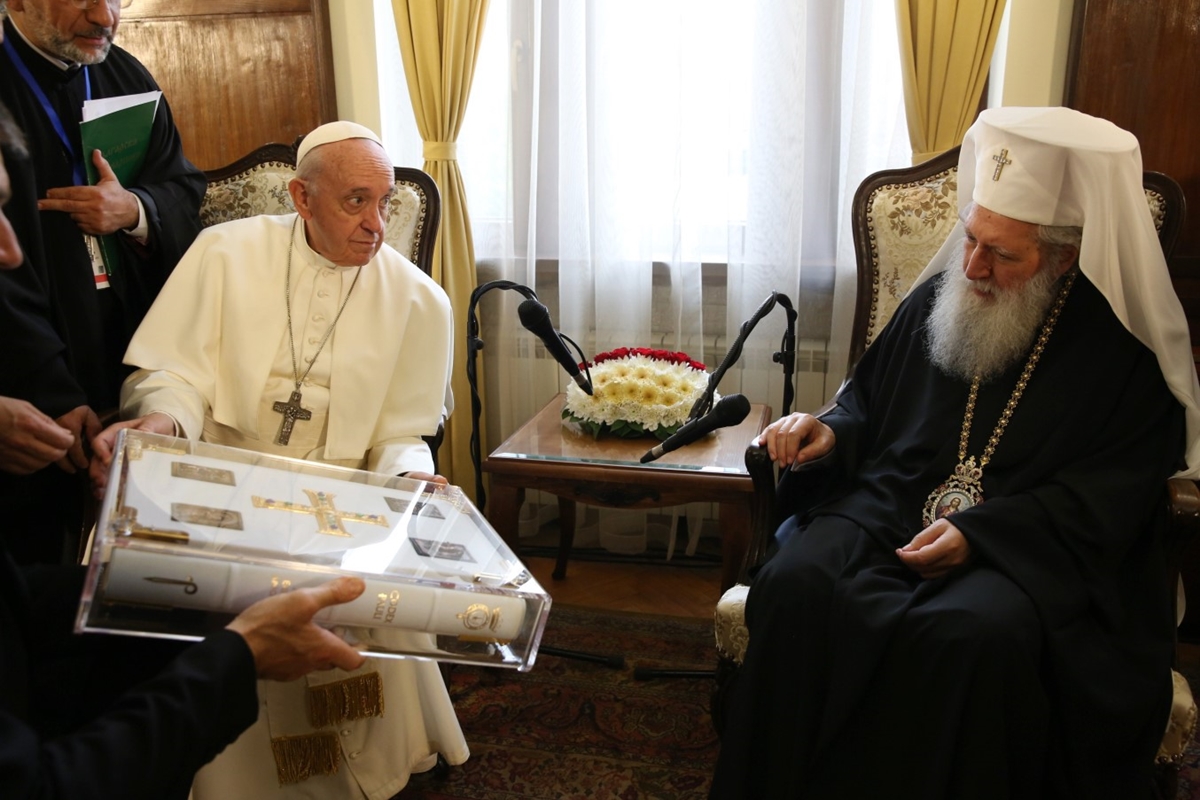 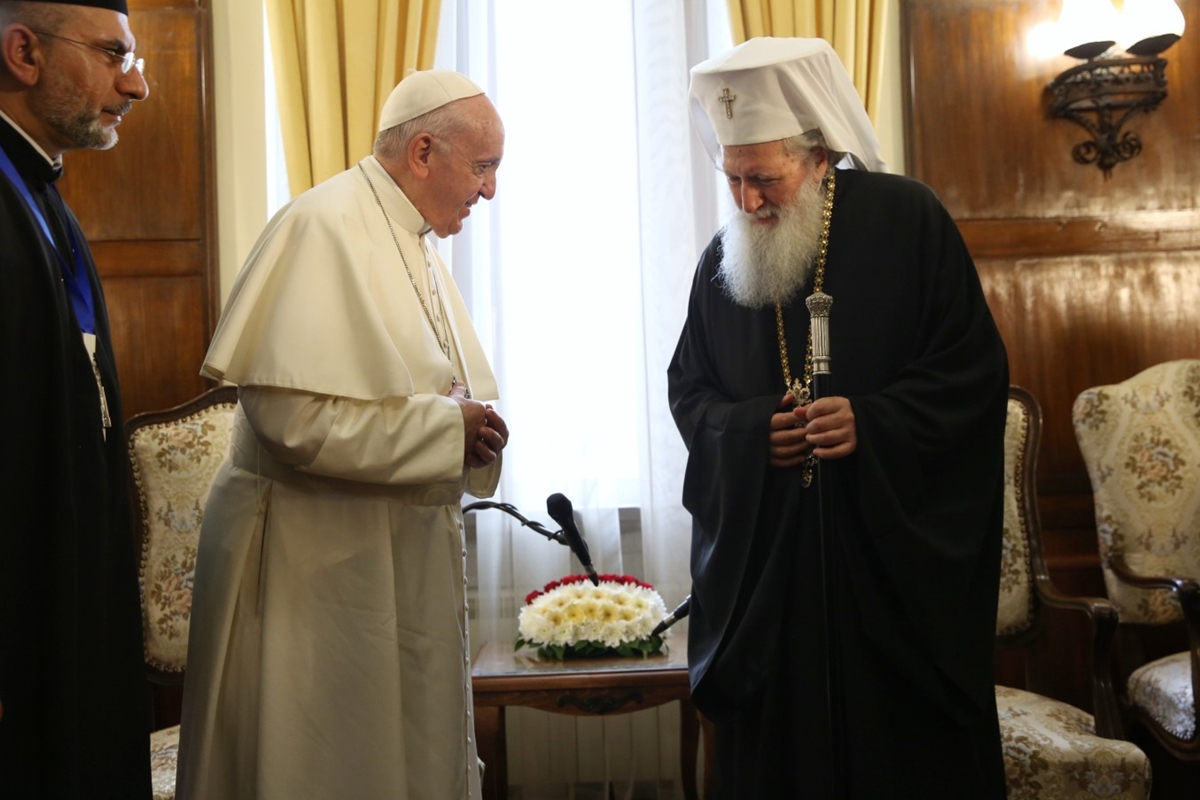 Pope Francis opened his statement with a greeting on the Orthodox Christian Easter. He noted that May 5 2019 was the day of St Thomas in the Orthodox calendar. In the Christian bible, it was doubting Thomas who wanted to put his hand in the wounds of Jesus.

“The wounds that opened up among us, Christians, in the course of history, are painful tears that have been inflicted upon the Body of Christ, which is the Church. And today we touch their consequences by hand. But perhaps if we put our hand together in these wounds and confess that Jesus rose again and declare Him to be our Lord and our God if, by acknowledging our imperfections, we are immersed in His wounds of love, we can find again the joy of forgiveness and to anticipate the day when, with God’s help, we can can serve at the same altar the Easter mystery.”

Pope Francis said that “this meeting, which I so much wanted” came after John Paul II had held talks with Neofit’s predecessor, Patriarch Maxim.

The Pope also referred to Pope John XXIII, who had been an Apostolic Legate in Bulgaria, and to the fact that the Bulgarian Orthodox Church had sent observers to the Second Vatican Council, and to the annual pilgrimage by the Bulgarian delegation to Rome on the day of Saints Cyril and Methodius.

“I enjoy the warm reception here reserved for my envoys, whose presence has increased in recent years, and the co-operation with the local Catholic community, especially in the cultural sphere.

“I am confident that with God’s help, and at a time when Providence decides, these contacts will be able to positively influence many other aspects of our dialogue. Meanwhile, we are called to go and act together to give testimony to the Lord, in particular by serving the poorest and forgotten brothers in which He is present. The ecumenism of the poor,” Pope Francis said.

Cyril and Methodius, Byzantines in culture, had the courage to translate the Bible into a language accessible to the Slavic peoples so that the divine Word could precede human words, he said.

“Their courageous apostolic work remains for all the pattern of evangelism. An area that we experience in the gospel is that of the younger generations. How important it is to respect the relevant traditions and specificities, to help and to find ways to convey faith in language and forms that allow young people to experience the joy of a God who loves them and calls them! Otherwise they will be tempted to trust the many fraudulent sirens of the consumer society.”

Pope Francis told the Bulgarian Orthodox Church leadership that he would go on to Alexander Nevsky cathedral for prayer.

“Your Grace, dear brethren, I assure you of my prayer for you, for faithful to this beloved nation, to the high calling of this country, to our path in the ecumenism of the blood, the poor, and the mission. In turn, I ask for a place in your prayers, in the confidence that prayer is the door that opens every time for the good. I would like to thank again for receiving me and to assure you that I will bear in my heart the memory of this brotherly meeting,” Pope Francis said.