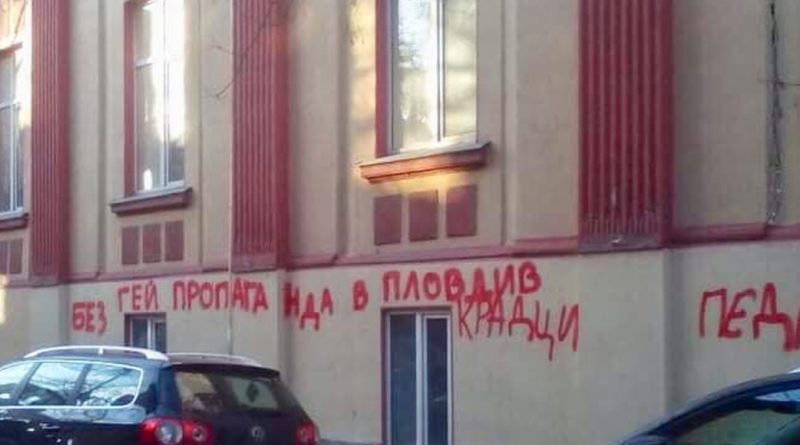 Homophobic graffiti was daubed on the headquarters of the Plovdiv 2019 Foundation on March 19 in the latest attack on the inclusion of the Balkan Pride project in the city’s European Capital of Culture 2019 programme.

The authorities moved swiftly to clean the graffiti, which included the words “no to gay propaganda in Plovdiv”, “thieves” and a vulgar term for LGBTI people, off the building. The vandalism of the building, located in the city’s historic Tobacco Town district, has been reported to the police and Plovdiv municipality.

One of numerous projects in the Plovdiv 2019 European Capital of Culture programme, Balkan Pride “focuses on human rights and the struggle for equality, seeking to present a contemporary reading of Balkan traditions in the context of global society and our digitalised reality,” according to the foundation’s website.

“An exhibition, a public discussion and a Balkan Pride musical event will present photos, artefacts and audiovisual installations from pride parades in big Balkan cities, including Sofia.

The Balkan Pride project was initiated by GLAS (Gays and Lesbians Accepted in Society), an organiser of the annual Sofia Pride.

Last week, VMRO Plovdiv leader Borislav Inchev said that there should be “no such events in the European Capital of Culture” while BSP city council leader Nikolai Radev read a declaration saying that “we strongly protest against the fact that the Plovdiv 2019 Foundation is launching projects promoting ideas that are not traditional for Bulgaria and the Bulgarian society”.

The BSP declaration said: “The society of Plovdiv has proven to be tolerant, and values such as family and morals are part of this tolerance and should not be omitted, we choose to defend the traditional Christian model of family relationships”.

The Balkan Pride project also has been opposed by local clubs’ “football fans”, frequently associated with ultra-nationalist actions and intolerance of minorities of various kinds.

Plovdiv mayor Ivan Totev, of Prime Minister Boiko Borissov’s GERB party, rejected calls for the resignation of Kuyumdzhieva and said that neither the municipal councillors nor the governing board of the foundation could pronounce on the artistic value of the events. Totev said that if a motion calling for the resignation of Kuyumdzhieva was tabled at a city council meeting, it would be discussed as a matter of procedure.

Kuyumdzhieva said that any attempt at external and political intervention in the content was unacceptable. “Such attacks on the programme can only be treated as manifestations of censorship and discrimination, for which there are responsible authorities at national and European level,” he said.

She said that the main goal and concept of the Plovdiv European Capital of Culture 2019 programme was “to show different aspects of contemporary society, to include diverse communities and minorities, to include art and culture in helping and protecting basic human rights of the first and foremost value in the great European family – freedom”.

The GLAS Foundation said in a Facebook post that after the VMRO attack on the project, posters had been put up in Plovdiv “spreading fabricated facts about LGBTI people”.

GLAS said that it would monitor the reaction of Plovdiv municipality and the institutions regarding the unauthorised distribution of the posters and hoped to see the posters denounced as hate speech.

GLAS Foundation’s Dimitar Bogdanov said that the exhibition and discussions would take place indoors and there was never any idea for the project to be a Pride parade.

Speaking out in support of GLAS was the Organization of the Jews in Bulgaria “Shalom”, which recently signed a memorandum of co-operation with several NGOs, including GLAS, to combine their efforts to combat antisemitism, racism, xenophobia and all other forms of discrimination in Bulgarian society based on religious, ethnic, national, social or other characteristics.

Shalom expressed its support to its partners at GLAS and full confidence in the artistic value of their Balkan Pride project.

“We strongly disagree with the statements of some political parties that the Plovdiv 2019 Foundation is promoting ‘projects promoting ideas that are not traditional for Bulgarian and Bulgarian society’,” Shalom said.

The organisation said that the Balkan Pride project full meets the main goal and concept of the programme of Plovdiv European Capital of Culture 2019, to show different aspects of modern society, to include diverse communities and minorities, to involve art and culture in helping and protecting basic human rights and freedom – the first and most important value preached in the great European family.

“Unfortunately, the reaction shows an attempt at political interference and to make dividends, which is unacceptable and demonstrates only the need for a discussion on the subject in our country, without a party hue,” Shalom said. 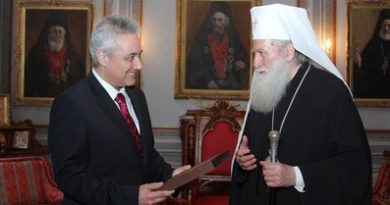