A suspect in the terrorist attack on two mosques in the New Zealand city of Christchurch in which 49 people died visited Bulgaria in November 2018, Bulgarian Prosecutor-General Sotir Tsatsarov said.

Tsatsarov was speaking after a special meeting on March 15 of security, intelligence and law enforcement chiefs called in Sofia by Prime Minister Boiko Borissov in the wake of the terrorist attack in New Zealand.

Bulgarian media reported that automatic rifle magazines found at the scene of the mass shooting in the New Zealand city had been inscribed, in Cyrillic script, with the names of battles and figures from the time of the struggle against Ottoman rule. Apart from references to these events in Bulgarian history, there were also inscriptions in Serbian and Georgian.

Tsatsarov told the media at the March 15 briefing in Sofia that Brenton Tarrant, named as a suspect in the attack on the mosques, had been in Bulgaria between November 9 and 15 2018. He had arrived in Sofia on a flight from Dubai.

On November 10, Tarrant had hired a car and travelled on a route from Sofia via Pleven, Gabrovo, Bachovo, Kazanluk, Blagoevgrad and Pernik, including other places in Bulgaria.

From Bulgaria, he had flown to Bucharest, from where he rented a car and went on Hungary.

Prosecutor-General Tsatsarov said that investigations were proceeding into what contacts Tarrant had made in Bulgaria.

Tarrant also had been in the Balkans in December 2016, when he had been in Serbia, which he had entered by bus from Montenegro. Tarrant reportedly also visited Bosnia and Herzegovina, and Croatia.

Media reports on the terrorist attack have noted that the weapons used and a “manifesto” made references to episodes in the history of the Balkans.

The Bulgarian Prosecutor-General said that he was working in close contact with services in the United States and New Zealand.

“We have to establish whether the purpose of visiting the country was to study historical places, or something else,” he said.

Tsatsarov said that there was no evidence of terrorist activity and links in Bulgaria.

Bulgaria’s Interior Minister Mladen Marinov told the briefing that there was no new information to change the security status in Bulgaria.

Bulgarian Foreign Minister Ekaterina Zaharieva, who repeated her earlier condemnation of the terrorist attack on the mosques in New Zealand, said that she did not want the name of Bulgaria and the history of Bulgaria to be associated with the act of terrorism in Christchurch.

The terrorist attack on the mosques in Christchurch has been condemned by Bulgarian Prime Minister Boiko Borissov and head of state President Roumen Radev.

Among the many leaders across the world who have condemned the terrorist attack in New Zealand was Serbian Foreign Minister Ivica Dačić.

“Serbia has nothing to do with this,” Dačić said, in an apparent reference to the attackers’ invocation of Serbian history. “We condemn this. It damages Serbian interests and we will arrest anyone that we suspect of this,” he said.

Bulgarian National Radio reported on March 15 that security services in Georgia were seeking information in connection with the weapons used in the terrorist attack on the mosques in Christchurch having had inscriptions in Georgian.

Covid-19: Next year, no one will want to come to Bulgaria, Kantardzhiev says 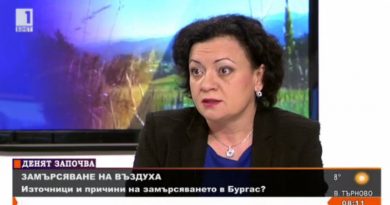 Lukoil’s refinery in Bulgaria to be fined for air pollution