Bulgaria has issued the “Code Orange” warning of hazardous weather forecast for three districts on November 21, while all of the rest of the country faces the lesser “Code Yellow” warning of potentially dangerous weather.

The three districts, Haskovo, Kurdzhali and Stara Zagora, are set to see between 30 and 50 litres of rain a square metre, according to weather forecasts.

All of the rest of the country, including capital city Sofia, faces about 20 litres of rain on November 21.

For eight districts, the “Code Yellow” warning was issued not only for rain but also for forecast snow and icy conditions. The districts are Gabrovo, Lovech, Montana, Pleven, Rousse, Veliko Turnovo, Vidin and Vratsa.

The weather forecast for Sofia for November 21 was for a minimum temperature of four degrees Celsius, rising to seven degrees. Bulgaria’s second city Plovdiv was set for a low of six and a high of 11 degrees.

At the Black Sea, the forecast for Varna was for a low of six, rising to 12 degrees, and for Bourgas, a low of 10, rising to 15 degrees.

On the Danube, Rousse would face a minimum three degrees and a maximum five degrees Celsius, according to forecasters. 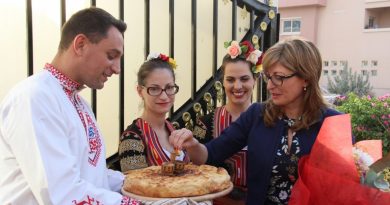