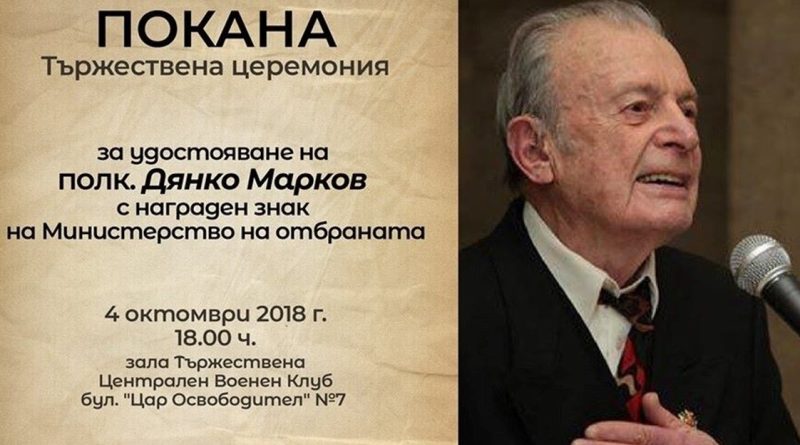 The Organization of the Jews in Bulgaria “Shalom” said on October 3 that it found it unacceptable that the country’s Ministry of Defence planned to confer honours on retired colonel Dyanko Markov.

“As an unrepentant participant in a proven pro-fascist and antisemitic organization such as the Union of Bulgarian National Legions, he deserves not to be encouraged for his attempts to educate new generations of legionnaires, Ratniks and Branniks,” Shalom said in a statement, a day before the Defence Ministry’s ceremony honouring Markov at Sofia’s Central Military Club. October 4 was chosen by the ministry because it is Markov’s 96th birthday.

The Ratniks, founded in 1936, were a far-right, pro-Nazi Bulgarian nationalist organisation. The Branniks were a Bulgarian pro-Nazi youth organisation of the same period.

Markov was a member of the Union of Bulgarian National Legions, which was headed by Hristo Lukov – the general whom far-right and neo-Nazi supporters have honoured annually every February for several years in a controversial march through Sofia. In its early years, Markov turned out in support of this march, insisting that Lukov was a patriotic hero, not a fascist. He repeated that insistence about the Legionnaires in a book he wrote.

Three times a member of Bulgaria’s National Assembly on the ticket of the centre-right Union of Democratic Forces coalition, Markov spoke in a July 2000 debate in the House amid controversy over the events of March 1943, when Bulgaria rescued Bulgarian Jews from the Holocaust, while Jews in the “new lands” under Bulgarian administration were handed over to the Nazi death camps.

According to a transcript of the National Assembly sitting, Markov – referring to the deportation of the Jews from the “new lands” in northern Greece and Yugoslavia – said: “The deportation of a hostile population is not a war crime. The United States deported the Pacific coastal population of Japanese origin during the Second World War. And no one gave a damn about it”.

Yuliana Metodieva, a human rights activist and editor-in-chief of the Bulgarian human rights news and features website Marginalia, described Markov in writing as an antisemite. This led to court actions by Markov against Metodieva, all three of which he lost, the most recent in the first half of 2018.

In its October 3 statement, Shalom said that Markov’s “enlightenment patriotism” saw the 11 343 Jews from neighbouring territories under Bulgarian administration who in March 1943 were deported to be murdered at Nazi death camps as a “hostile population”.

Military feats do not erase the ideology that marked almost every aspect of Markov’s life, the statement said.

“He himself is aware of the inheritance he wants to leave, and he does not hesitate to build it with all possible means of influence on some young people. And they, in their desire to deny a totalitarian regime, are happy to accept another, seeing in Markov a role model,” Shalom said.

“Today, when in Europe there are stronger than ever calls for a revival of Nazi ideology, for purity of blood, for intolerance to foreigners of different faiths and skin colour, we cannot afford to remain silent. We cannot remain silent when people such as Markov are glorified publicly and in a way that allows nostalgia for a dark-minded regime.

“This would be an insult both those (Bulgarian Jews) who were rescued, but were humiliated by the Defence of the Nation Act and their brothers and sisters who were killed in the death camps,” the statement said. 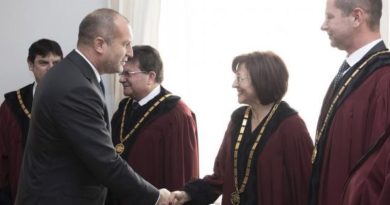 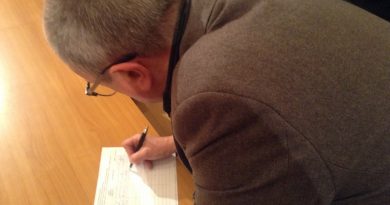