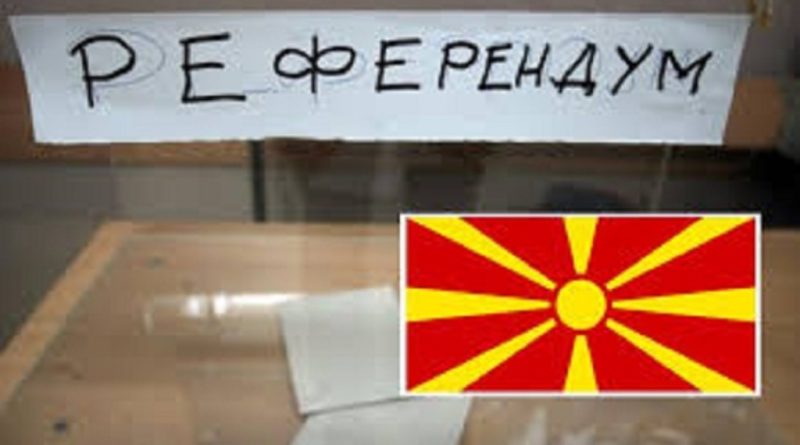 Voter turnout in the September 30 referendum in the Republic of Macedonia on its deal with Greece on the former Yugoslav republic’s future name was just 22.56 per cent at 3.30pm Skopje time, raising the question of whether turnout would reach the 50 per cent turnout needed to be valid.

The question in the referendum is: “Are you in favour of the country’s accession to the Nato and EU by accepting the agreement signed between Macedonia and Greece?”

The referendum is a sequel to the Prespa agreement between the Republic of Macedonia’s Prime Minister Zoran Zaev and his Greek counterpart Alexis Tsipras to end a decades-long bilateral dispute over the use of the name “Macedonia” by re-naming the former Yugoslav republic “Republic of North Macedonia”.

Polls opened at 7am and close at 7pm (8pm Bulgarian time). The turnout in the referendum by 3.30pm in Macedonia meant that about 334 000 of the about 1.8 million eligible to vote had cast a ballot. Reports in Macedonia media said that the rate of turnout by mid-afternoon on September 30 was lower than in previous elections.

Among those who voted was Prime Minister Zaev, who after going to the ballot booths in his birthplace Strumica, urged his compatriots to vote, saying that he was confident that they would do so, “because more than 80 per cent of them are in favour of EU and Nato accession”.

President Gjorge Ivanov, as he had repeatedly signalled in recent weeks, did not vote. Ivanov, who was elected on the ticket of then-prime minister and then-VMRO-DPMNE Nikola Gruevski’s party, has described the name deal with Greece as “poisonous” and a “flagrant violation of sovereignty”.

Characterising the agreement with Greece on the proposed future name of the country as “national suicide”, Ivanov said: “This referendum could lead us to become a subordinate state, dependent on another country…we will become a state in name only, not in substance”.

“Today’s referendum is about an agreement which damages the country. This is why Mickoski decided not to vote, sending a clear message that he doesn’t agree with the deal reached in Prespa,” Stoilkovski said, the Independent Balkan News Agency reported.

Ethnic Albanian party BDI (Democratic Union for Integration) joins Zaev’s SDSM party in wanting a “yes” vote. A “yes” vote, and a high turnout, has been backed by several Western countries. Notably, German Chancellor Angela Merkel recently travelled to the former Yugoslav republic to support a vote in favour of the name deal.

Deutsche Welle reported that with Moscow opposing Nato expansion, US Secretary of Defence Jim Mattis said on September 17 that there was “no doubt” Russia funded the “No” campaign in Macedonia.

The September 30 referendum has a consultative nature, as Parliament would be required to approve amendments to the constitution to allow the name deal to proceed.

The vote, at 3480 polling stations in 80 municipalities across the country, was being monitored by more than 12 000 domestic observers and 493 foreign monitors, including close to 200 deployed to Macedonia on behalf of the Organisation for Security and Co-operation in Europe.