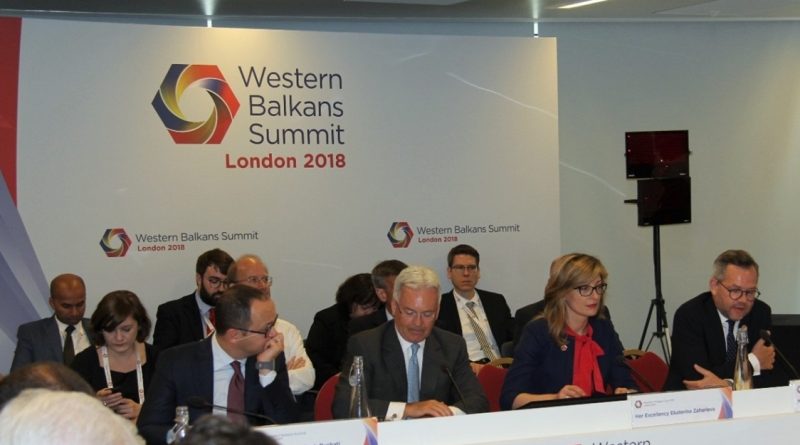 The Berlin Process will accelerate the European integration of the Western Balkans, and complements and does not replace the European perspective of the six countries, Bulgarian Foreign Minister Ekaterina Zaharieva said in London.

Zaharieva was speaking on the eve of the Western Balkans Summit being held in London on July 10, which is now taking place against the Brexit political drama that prompted the resignation of Boris Johnson as Foreign Secretary.

The UK Foreign Office billed the summit as bringing together “the leaders of the Western Balkans countries and like-minded European partners to strengthen security co-operation, increase economic stability and encourage political co-operation”.

Johnson had been scheduled to announce on July 10 that the UK would commit 10 million pounds to help build digital skills and employment prospects for young people in the Western Balkans.

Zaharieva, speaking to her counterparts from the Western Balkans, the UK, Austria, Germany, Italy, France, Poland, Croatia and Slovenia, said that the European perspective is the main stimulus for all the positive developments in the region in the past year.

“We have achieved much in this time – the Good-Neighbourliness Treaty between Bulgaria and the Republic of Macedonia, the name agreement between Athens and Skopje, the Six Nations Country Strategy, the Sofia Summit and the Western Balkans agenda followed by the decision to start negotiations with Albania and the Republic of Macedonia, as well as a number of innovative solutions in regional co-operation within the SEECP, ” Zaharieva said.

She said that on its own, the consensus at the European Council on the issue of opening negotiations was a success.

“I thank my colleagues from the UK, Germany and our other friends, who we convinced together with the other countries in the EU that the decision to start the negotiations is beneficial for everyone,” Zaharieva said.

She said that the Berlin Process and meetings such as the July 9 one among the ministers would help keep the focus on the Western Balkans after the end of the Bulgarian Presidency of the Council of the EU, and those of Austria and Romania, which have pledged to maintain this focus.

The Berlin Process was launched in 2014 by German Chancellor Angela Merkel. Since then, a summit of the participating countries has taken place each year. At the previous meeting in Trieste, in which Bulgaria took place, more than half a billion euro of investment was approved, of which 194 million euro will be provided by the EU and the rest is coming from loans from the European Investment Bank, the European Bank for Reconstruction and Development, as well as through national co-financing from the countries of the Western Balkans.

The UK Foreign Office said that the funding announced on July 9 would see the British Council provide training to children in more than 4500 schools, to bolster digital literacy and core skills across the region.

“By providing access to a digital education, this funding will help foster the next generation of innovators and entrepreneurs, both in the Western Balkans and UK,” the Foreign Office said.

The announcement also involved an additional one million pounds “to help the region address difficult legacy issues of the past, this includes working to find and identify the 12 000 victims still missing from the conflicts of the 1990s”.