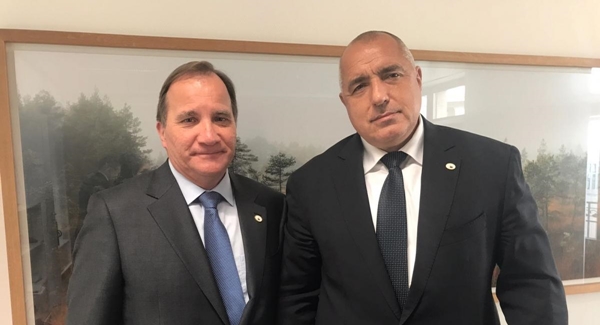 Bulgarian Prime Minister Boiko Borissov has told his Swedish counterpart Stefan Löfven that negotiations on the possible acquisition by Bulgaria of Gripen jet fighters will begin within coming weeks, focusing first on industrial co-operation and investments in Bulgaria.

But Bulgaria also intends talking to Italy about its offer of Eurofighters, it emerged from Borissov’s remarks, while he confirmed that the Portuguese offer of F-16s was no longer being considered.

Borissov said that either next week or the week thereafter, his Cabinet would agree to the start of negotiations with bidders to supply the Bulgarian Air Force with multi-role jet fighters.

The word “pre-determined” came up again in this context, as it has repeatedly in recent months regarding the jet fighter acquisition process, with then-caretaker Prime Minister Ognyan Gerdzhikov and Borissov having been vague and contradictory about the way forward regarding the choice of aircraft.

At the time of the Gerdzhikov January-May 2017 administration, a military expert committee, in a report presented to the caretaker government, ranked the Gripens top.

On June 23, Borissov now described the Gripens as “pre-determined”, saying that President Roumen Radev – a former Air Force commander – his adviser then as defence minister and experts had ranked Gripen top, with the Eurofighter in second place and the F-16 bid as disqualified.

Borissov, however, again displayed little appetite for the huge spending. With the acquisition of two naval patrol vessels and armoured cars for the infantry, Bulgaria is looking at an estimated 3.56 billion leva in defence spending for the modernisation of its military.

He said that he did not like this “arms race” and he did not believe that taxpayers would either.

Borissov said that he anticipated very tough and long negotiations.

He said that he had told Swedish prime minister Löfven “that we are sitting and first talking about industrial co-operation. Secondly, about investments in Bulgaria, so that what we pay, 100 per cent, we can get it back from other things.

“We are making a decision, we are negotiating first with you, then with Eurofighter,” Borissov said.

He wanted to achieve the creation of new jobs in Bulgaria and for the Bulgarian “military-industrial complex” to provide employment and make profits. Bulgaria would now spend hundreds of millions on weaponry that it once produced, Borissov said.

There was no area in which money was not wanted, for salaries, for pensions, for roads and fixing holes. “Just for the Hemus Motorway we need nearly 100 million to restore the bridges so that they do not fall,” Borissov said.

“I also want to have new aircraft, tanks, for military salaries to go up, the ships to be better, I want pensions and salaries and income too (to go up),” Borissov said.

He said that he did not want Bulgaria’s military to continue with Soviet equipment, “but this has to be in parallel to the other commitments we have made and with which we won the elections, first, in terms of teachers’ salaries, minimum pensions and administrative burdens,” he said.

Bulgarian PM Borissov on Dačić spat: Serbia should come to an understanding with Kosovo