Six people, including two Border Police, have been detained in an operation against an organised crime group that was trafficking refugees through Sofia Airport, Bulgarian Prosecutor-General Sotir Tsatsarov said on May 26.

This is the first time that Bulgaria’s security services have bust such an operation at the airport in the capital city.

Two of the others arrested were foreign citizens, from Bangladesh, who had been living in Bulgaria for about more than a decade, Tsatsarov said. The other two were refugees who had entered the country illegally.

The operation led by the Special Prosecutor’s Office was continuing, a news conference was told.

Further arrests were possible by the end of the day.

The head of the Special Prosecutor’s Office, Ivan Geshev, said that the criminal operation was also a threat to Bulgaria’s national security. Through the operation “even the head of Al-Qaeda” could have been brought into Bulgaria and from here to elsewhere in the EU.

The trafficking of foreigners involved people arriving from different destinations. The most recent detainee had arrived from Cyprus at Sofia Airport, with irregular documents but had been admitted by Border Police.

The news conference was told that the fee for the trafficking operation was 5000 euro, and the cut received by a Border Police officer was 4000 leva (about 2000 euro).

Asked what happened after the foreigners arrived in Bulgaria, Tsatsarov said: “Well, what is happening, this is yet to be established. These citizens, in principle, after entering Bulgaria, the goal is to enter Bulgaria, to settle here or, in most cases, simply to look for a way to take them to Western Europe.”

Tsatsarov said that the operation had been carried out in difficult conditions because of the complications involving the use of surveillance at the airport.

Interior Minister Valentin Radev said that a large amount of money had been found and searches were continuing.

Interior Ministry chief secretary Mladen Marinov said that because of the current reduction of migratory pressure, the “business environment” for people-trafficking was narrowing.

He said that the people-trafficking operation that had been bust was one of the most serious among the competing groups in the country, dealing with moving people from Syria through Turkey and onwards towards Western Europe.

Separately, an Interior Ministry statement on May 26 said that the day before, a special police operation against human trafficking had been carried out in Pleven.

Two men, one 49 and the other 32, both from Pleven, had been arrested.

During search-and-seizure operations at five addresses in the town, illegally possessed firearms – five pistols and a rifle, all with numbers erased – documents and other items had been seized.

The two men had been charged under the Penal Code and were in 72-hour custody, the ministry said.

The strange saga of Ataka’s visit to Brussels

Bulgarian PM to protesting police – pay will go up, but not now 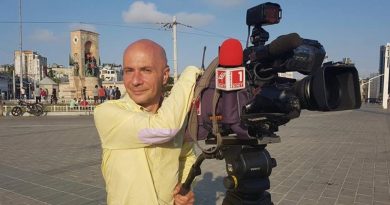