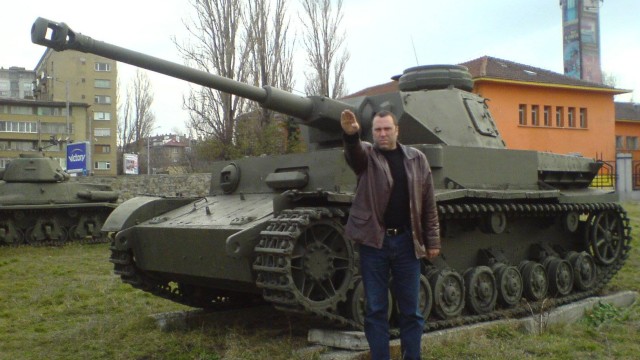 Bulgarian Defence Minister and nationalist United Patriots co-leader Krassimir Karakachanov said on May 19 that no decision had been taken on firing a ministry official photographed giving a Nazi salute, because the official had a heart attack and was in hospital.

On May 18, Borissov – the leader of GERB, the majority partner in the coalition government sworn into office just more than two weeks ago – called for the dismissal of Antonov because of the picture, which shows Antonov giving the Nazi salute next to a Second World War German Maybach tank in the grounds of Sofia’s Military History Museum.

Reports said that Antonov had a heart attack as the controversy over the photograph mounted.

Karakachanov said that he personally would examine the case of Antonov after the official was discharged from hospital, but in remarks to journalists, appeared to indicate reluctance to dismiss him.

Karakachanov, who in Borissov’s government also is deputy prime minister in charge of public order and security, said that one could not just dismiss an official with 18 years of experience just because of a photograph taken 10 years ago. He said that there was no such provision in Bulgaria’s Labour Code.

He said that it was not normal and human to take a decision on a dismissal when a person is in hospital.

“I’ll wait for him to get out of there, I’ll call him personally for him to explain, and then will make a decision,” Karakachanov said.

“This whole campaign against United Patriots has one goal – to break the coalition and trigger a collapse of the government,” Karakachanov said.

He said that he believed the opposition Movement for Rights and Freedoms (the fourth-largest group in the National Assembly, and a party historically led and supported in the main by Bulgarians of Turkish ethnicity, long the bete noire of Bulgaria’s nationalist parties) to be behind the attacks on the coalition government.

The two Nazi salute photograph episodes, and reported comments by United Patriots co-leader and another deputy prime minister, Valeri Simeonov, triggered acrimonious exchanges in Bulgaria’s National Assembly on the morning of May 19.

Simeonov, who denies making the comments attributed to him – he allegedly made light about a visit to Buchenwald, but insists that he has been misreported; the daily that published the report is standing by its story – has rejected opposition calls for his resignation as deputy prime minister.

The person whose appearance in a photograph giving a Hitler salute marked the start of the controversy, Pavel Tenev, earlier this week resigned as deputy regional development and public works minister after just two days in office. Tenev has said that his pose was meant to be “humorous”.

The controversies, including over Simeonov’s reported comments, prompted two Bulgarian Jewish organisations to issue a statement on May 18 underlining that the Holocaust was no topic for jokes.

US ambassador-designate to Bulgaria Marcie Ries spells out priorities