European Union foreign policy chief Federica Mogherini and European Enlargement Commissioner Johannes Hahn have condemned the April 27 ongoing attacks on MPs in Skopje that followed the election of an ethnic Albanian as Speaker of the Republic of Macedonia’s parliament.

“The acts of violence in the Parliament are wholly unacceptable and we call for calm and restraint,” Mogherini and Hahn said.

The Interior Ministry and the police must ensure the security of the Parliament and its members.
“Democracy must run its course. We take positive note of the election of Talat Xhaferi as Speaker of the Parliament, as reported,” the joint statement said.

“The European Union is convinced that political dialogue in the institutions is the only way forward and we urge all political actors to honour the Constitution of the country and act in the spirit of democratic principles, decency and common sense.”

They noted that Macedonia is a candidate country “and the European Union is ready to work with the Parliament on the necessary reforms to move the country forward on its European path”.

Protesters stormed into Macedonia’s parliament on Thursday after a vote to elect an ethnic Albanian as parliament speaker, the BBC reported.

Demonstrators from the United Macedonia Initiative forced entry into the building in Skopje.

Social Democrat leader Zoran Zaev was left with blood pouring down his face after fights broke out.

In the December 11 2016 parliamentary elections in the Republic of Macedonia, Gruevski’s party narrowly won the largest share of votes, but failed to form a coalition with Albanian minority parties so they could continue to govern.

Zaev’s SDSM has negotiated a coalition with three Albanian parties and has created a new majority in the parliament of 69 MPs out of 120. 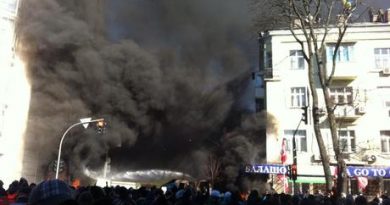