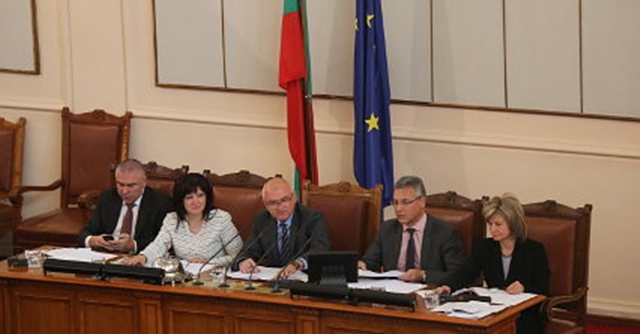 Bulgaria’s National Assembly adopted on April 28 a declaration strongly condemning the previous day’s assault on the parliament in Skopje, saying that “aggression against our colleagues is an unacceptable assault on the institution of parliament and on democracy”.

“We call for wisdom and refraining from any provocations that could escalate into inter-ethnic conflict,” said the declaration, read out by Bulgarian National Assembly Speaker Dimitar Glavchev.

“We express our support for the unity and territorial integrity of the Republic of Macedonia.”

The proposal for a joint declaration by the Bulgarian Parliament was made by Kornelia Ninova’s Bulgarian Socialist Party, the second-largest group in the National Assembly.

Earlier, Ninova said that the president of Macedonia and all leading political forces should take action to end the tensions. “We believe that solving the crisis is only possible on the basis of the constitution”.

On April 27, dozens of people, including Macedonian socialist leader Zoran Zaev, other MPs and police were injured when nationalists invaded the legislature in Skopje in protest against the election of an ethnic Albanian as its speaker.

This is the latest episode in a political crisis in Macedonia that has been in its current phase since December elections failed to result in successful coalition negotiations on a government. Former prime minister, conservative Nikola Gruevski, failed to make a deal with an ethnic Albanian party. Zaev is seeking to form a government but his bid is not being supported by Macedonian president Gjorge Ivanov.

Bulgarian nationalist United Patriots co-leader Valeri Simeonov told reporters in Parliament that the suppression of tension in another country is not the work of Bulgaria.

He said that Bulgaria should be very careful and judge every one of its diplomatic moves.

Simeonov said that solving the parliamentary problem there is the work of the Macedonian state.

The political crisis in Macedonia was growing into an ethnic one, he said.

“I am firmly in favor of preserving territorial integrity and speeding up this issue, but I personally am skeptical about such a quick option,” Simeonov said.

Asked whether there is external interference that has led to what is happening in the country, he said that what was being seen was a more active foreign policy on the part of the Albanian state.

Direct intervention by Albania through instructions and influence on the Albanian minority in Macedonia should not be allowed, this should be checked, Europe must be alert, said Simeonov, whose political formation will within coming days be part of Bulgaria’s new coalition government.

Another of the United Patriots’ co-leaders, Krassimir Karakachanov, said that he disagreed with the assessment of Bulgaria’s caretaker cabinet that there was no danger to Bulgaria from the situation in Macedonia.

According to Karakachanov, there was a risk of a refugee flow.

“Each civil conflict and inter-ethnic clash in Macedonia is a threat to the entire region, since there is intertwined interests of several countries. look at the reaction of Albania, look and that of Serbia.”

“Second, the truth is that laws should be respected,” said Karakachanov, who laid the blame for the situation at the door of the current prime minister of Macedonia and its “puppet president”, as well as opposition leader.

The pursuit of power in Macedonia was reaching the point where politicians were ready to bring the country into a civil war in order to gain power, he said.

On April 27, the leader of Bulgaria’s centre-right GERB party, Boiko Borissov – expected within days to return to office as prime minister – held telephone conversations with Macedonian political leaders Nikola Gruevski and Zoran Zaev urging them to normalise the situation in Macedonia.

Radev said on April 28 that he was deeply concerned by the tensions in the Republic of Macedonia and the clashes the previous night in that country’s parliament.