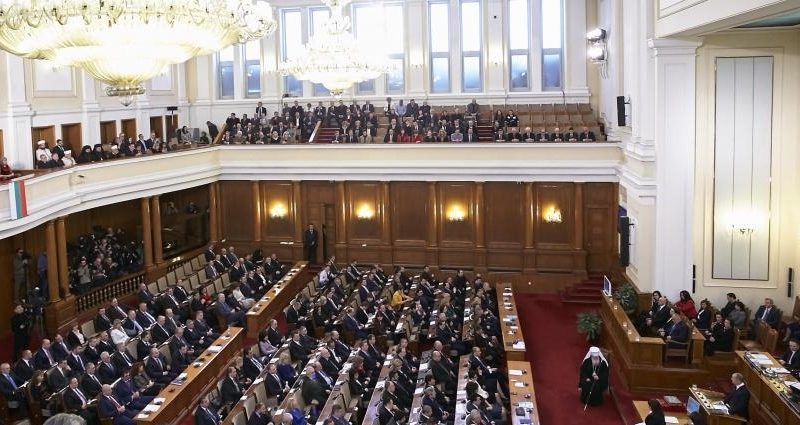 Roumen Radev has set something of a record for Bulgarian heads of state by being the subject of a call for his impeachment without actually having taken office yet.

And you thought it was only Trump who was the subject of speculation about his impeachment without yet having been sworn in.

There are significant differences between Trump and Radev, among the several being that Trump is becoming a head of government and of state, while Radev will have only the latter job, following his formal inauguration on January 22 as Bulgaria’s president. Trump never served, while Radev was a military pilot, an air force commander with the rank of general, someone who might be expected to behave like an an officer and a gentleman.

Bulgaria’s National Assembly is not noted for tranquil decorum, sometimes more closely resembling the rowdiness in the latter stages of an officers’ mess night. Facing heckling by some MPs as he made his first address to Parliament after taking the oath of office on January 19, Radev fell headlong into the trap.

While lengthingly reading his prepared speech, Radev took flak from some on the right-hand-side of the House (a peacetime pilot, there is no record of him ever having faced the real thing). Some of his political detractors laughed, at various points, others interjected.

Bulgaria, at the moment, is hardly without its political temperature slightly raised, notwithstanding the steady stream of snow that descended on the streets of Sofia outside the National Assembly building as the formalities within were underway. The country is heading to early parliamentary elections in late March, certain to be bitterly fought. It is a safe forecast that by the spring, Bulgaria’s political weather will get warmer still, probably in a stifling and prickly sort of way.

The election of Radev, on a ticket backed by the opposition Bulgarian Socialist Party, prompted Boiko Borissov to resign as prime minister. It was an obvious irony that Radev’s swearing-in was presided over by Speaker Tsetska Tsacheva, whom he vanquished in the November 2016 presidential elections.

It was left to Tsacheva to call for order from those unruly MPs, and in turn Radev responded.

“You have another week,” he said, going on to say that his credo was few words but effective action.

“I am convinced that the problems will not be solved with high-spirited declamation, but with precise diagnoses and specific measures. In this country there are still politicians that conduct battles with the past, the recent and distant (past). Those battles produce false heroes. The business with the past is part of the blind alley. Fatalism is our other weakness, but let’s not forget that Bulgaria has survived 13 centuries at a historical and geographic crossroads. What more persuasive proof that apathy is not our congenital defect. It is a weakness that I will combat. I believe that to be a Bulgarian is not to be doomed. To be Bulgarian is an honour.”

At this, some MPs from Borissov’s GERB party, the centre-right Reformist Bloc coalition and nationalist Patriotic Front co-leader Valeri Simeonov got up and walked out of the chamber.

Speaking to reporters after Radev read his address, Borissov appeared visibly irritated by Radev’s “you have another week” crack – though he added that he did not like the reaction of the MPs either.

Grozdan Karadzhov, a Reformist Bloc MP, said that Radev should at least have read through his speech once or twice previously “to pronounce it with the necessary fluency and diction”.

Karadzhov, who was among those who walked out, said that Radev had said that he would be laconic and use words with their precise content, “but at the same time his speech was an example of the absolute opposite, the hall laughed at him”.

The Reformist Bloc MP took the “you have another week” line as a threat, which he claimed made the president-elect open to impeachment.

Simeonov said to reporters, “what did he want to say? That he has landed on the clouds and like the son of God handed down judgment?”

The “you have another week” line, according to Simeonov, showed that Radev had a “flighty character” and in no way could he be the unifier of the nation – a reference to the constitutional provision requiring this of Bulgaria’s president, which Radev pledged to uphold.

This was the first time that the president-elect’s mask had slipped, Simeonov said.

Tsvetan Tsvetanov, parliamentary group leader of GERB (and the head of the campaign in which Tsacheva was defeated) described the statement by Radev as “unacceptable”.

But while right-wing and centre-right MPs appeared ready to break Radev’s sword over their collective knee, the leader of the Bulgarian Socialist Party was predictably gushing after Radev delivered his speech.

BSP leader Kornelia Ninova enthused to reporters that it was “a worthy speech by a worthy president”.

Radev will be formally inauguated on Sunday, at a ceremony in central Sofia. In the days following, he will appoint a caretaker cabinet, dissolve Parliament and decree an election date. His “you have another week” rejoinder to the hecklers, however ill-advised, was at least more or less accurate.