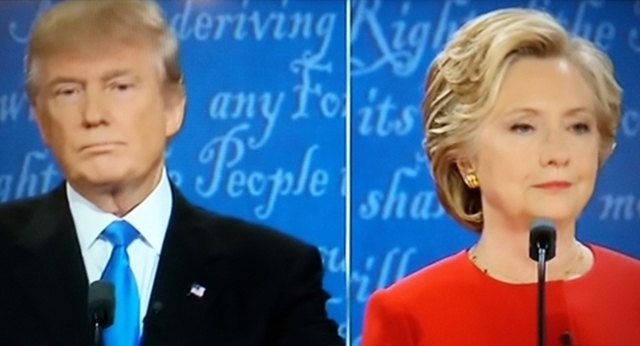 The September 26 first debate between presidential candidates Hillary Clinton and Donald Trump was a field day for fact-checkers, arguably especially in the case of Trump, but the 90-minute encounter added little new to the narrative so well-rehearsed by the rival camps.

In the hours before the debate, aggregations of polls made it clear that the candidates are effectively neck-and-neck. Will this debate have changed many minds? Probably not. Trump’s electorate includes not only the frustrated and the bigoted, but an essential ingredient in the mix is gullibility.

It takes gullibility to accept Trump’s ethereally-flimsy excuse for not releasing his tax returns, repeated again on the stage at Hofstra University – that he is being audited, and so his lawyers advise against releasing the returns. It has been reiterated repeatedly that the IRS sees no legal bar to the release of his returns. He sought to twist the issue into a trade-off against Clinton making public 33 000 deleted e-mails, but even then seemed to back down from that deal.

The debate traversed the economic future of the United States, race relations, foreign policy, and, predictably, Trump’s belated clawing for African-American support by whatever it is he is trying to communicate about his role in the “birther” artificial controversy he did so much to foster (or, in Trump World, that the Clinton campaign did when she was running against Barack Obama). It was cringeworthy to listen to Trump asserting that his insistence on the release of the President’s birth certificate had somehow helped Obama. That episode, Clinton said, had bothered Obama, a man of great dignity.

But dignity does not seem to be in Trump’s lexicon, though the word “bigly” apparently remains so.

“I am going to cut taxes bigly and you are going to raise taxes bigly,” Trump told Clinton.

With neither candidate in a clear lead before the November 8 vote, the debate never was going to be characterised by nuance and subtlety. Trump was at pains to portray Clinton as a politician from a class of political hacks unable to secure, or even negotiate, favourable trade deals. Unlike his view of himself, as a shrewd business person.

Clinton had her obviously extensively rehearsed lines too, and one could practically see the light going on every time she got the chance to use one. “Trumped-up trickle down”, for instance. She managed to slip in, in response to a Trump barb about her absence from the campaign trail, that she had been preparing not only for the debate but too “and you know what else I’m prepared for? I’m prepared to be president.”

Clinton’s language got a bit street as she accused Trump of having “stiffed” contractors on his projects. She sought to pin on Trump a track record as a racist (in direct contradiction to his claim that he had “developed very good relations with the African-American community”, a claim that polling would suggest is vastly exaggerated). Nor did she miss the misogynism, Trump’s labelling of women as pigs and dogs.

She hit Trump with the allegation of his having paid no federal taxes – zero, as she put it, for troops, vets and schools.

Given the conscious association with the Obama presidency of the Democrat campaign, the vastly divergent views of America were predictably apparent. For Trump, the sight of American airports was part of the claim that “we’ve become a third-world country” (talking point, kids: is that a subliminally racist reference to the President of the past eight years or so?). Time and again, for Trump, America was in a mess, being “ripped off” by every other country on the planet, being taken for a ride by Nato allies who, he repeated, were not paying their fair share.

Predictably, too, Trump sought out Clinton’s personal vulnerabilities – the e-mail server controversy, the fatal missteps in the Middle East (he sought to include in this list the Iran deal; Clinton sought strongly to differ on that point). On the e-mail controversy, Clinton repeated, as if by rote – no, by rote, really, her line about having made a mistake that she wouldn’t repeat.

Trump insisted, “I have much better judgment than she does,” adding that he had better temperament too. “I think my strongest asset is my temperament.” To be Donald Trump and make that claim with no sense of irony, you have to be Donald Trump. Clinton responded with spontaneous amusement: “Woo. okay,” she smiled.

Clinton was most confidently at home on foreign policy, predictably, and even seemed to momentarily rise above the brawl to send a message to Washington’s allies not to let Trump’s rantings about Nato and nuclear weapons bother them.

She reiterated the view that Trump’s temperament was unsuited to the role of commander-in-chief. A man who could be provoked by a tweet should not have his finger on the nuclear button, Clinton said.

“That’s getting old,” interjected Trump. “Its a good one, though,” Clinton responded.

Yes, it’s all getting old. The soundbites, the obfuscation, the issues driven by ill-informed internet chatter.

In this election, the contest is between two candidates who have in common the highest disapproval rating of anyone in the final race in the past 30 years. At the close of the debate, it was not difficult to see why. But it was difficult to see how any of those vital swing voters would be swayed, even as the fact-checkers worked by the minute. And the gullible? Nothing new to sway them, if anything even could.

Verdict? As a debate, this round went to Clinton, mainly for her ability to discuss issues with substance and conduct herself with dignity and politeness. But then on those criteria, in the case of Trump, the debate was over before it started.

Opinion: EU immigration policy is grist to the far-right mill