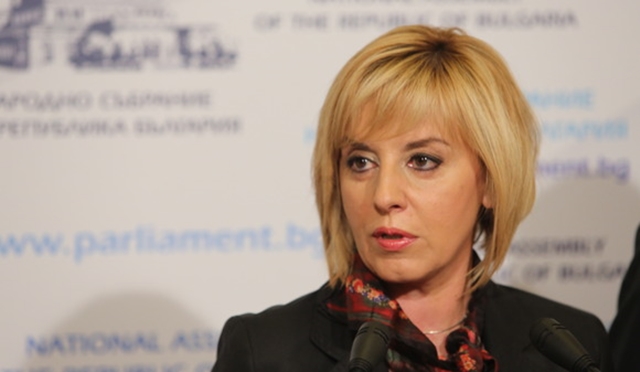 Bulgarian Ombudsman Maya Manolova has written a letter to Bulgarian Socialist Party (BSP) structures that nominated her to be the party’s candidate in the country’s November 6 presidential election, saying she was refusing to participate in the race because of backroom deals.

Manolova was a BSP MP and was deputy speaker of the National Assembly at the time of the now-departed 2013/14 administration, before being elected Ombudsman in October 2015.

The BSP has been in talks with splinter socialist party ABC and appears highly likely to put forward as its presidential candidate General Roumen Radev, former commander of the Bulgarian Air Force. With discussions and internal infighting over the nomination ongoing, the BSP has however not yet formally nominated a candidate, with a final decision expected at a forthcoming BSP national council meeting.

In the letter, made public, Manolova thanked those structures that had nominated her, but said that was refusing to participate in a competition the outcome of which was fixed in advance and in which the rules were broken.

“I do not participate in fratricidal wars,” she said.

“They are detrimental to those who initiate them and destroy public confidence in the political system,” Manolova said, adding that such behaviour over the years had already caused catastrophic damage.

Meanwhile, Bulgarian-language media reports said that “internal opposition” to Kornelia Ninova, elected as BSP leader in May 2016, could put forward as an alternative candidate Roumen Gechev, who was economy minister in the BSP Zhan Videnov government in the 1990s, an administration that was brought down by public protests against the economic and financial disaster into which the BSP led the country. Gechev also has been disclosed by the Dossier Commission to have an agent of State Security, Bulgaria’s communist-era secret service.

This internal opposition also was against two other names that have been floated as the BSP’s presidential candidate, Yanaki Stoilov – the BSP’s deputy speaker of the current Parliament – and MEP Iliyana Yotova, the reports said.

When Bulgarians go to the polls on November 6, they will be electing a new head of state, because incumbent President Rossen Plevneliev – elected in 2011 on the ticket of Prime Minister Boiko Borissov’s centre-right GERB party – announced in May 2016 that he would not stand for a second term in office.

GERB, the largest party in the current Parliament and which according to all opinion polls has by far the most support among Bulgaria’s electorate, has not yet announced its presidential candidate and has said that it would so in September.

Should not candidate win a decisive 50+1 victory on November 6, a second round will be held the following Sunday, November 13, between the two candidates with the most votes at the first round.