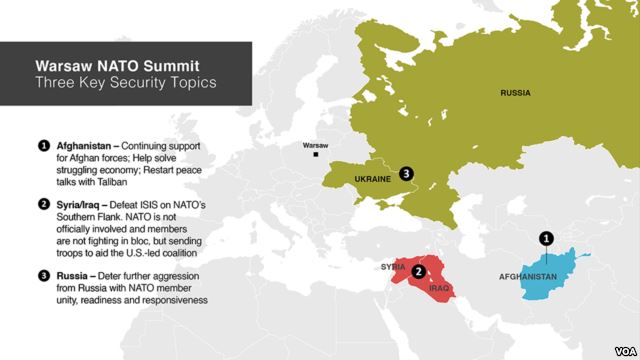 On the heels of a U.S. announcement to keep 8,400 U.S. troops in Afghanistan, NATO leaders will meet in Warsaw Friday and Saturday to discuss three key security topics: continuing support for Afghan forces, defeating Islamic State militants on NATO’s southern flank and deterring Russian aggression on the alliance’s eastern flank.

“Let’s be blunt: Alliances don’t have a choice. They have to walk and chew gum. You don’t prioritize key threats; you have to deal with all of them,” Anthony Cordesman of the Center for Strategic and International Studies told VOA ahead of the summit.

With U.S. troop numbers no longer uncertain, analysts say NATO leaders need a strategy to help Afghans solve a myriad of problems, including a struggling economy, a failure to restart peace talks with the Taliban and a rise in Afghan casualties following a fierce fighting season.

Cordesman says the Afghan war is something Afghan security forces and their NATO allies “clearly are not yet winning,” despite more than a decade of resources flowing into the country and thousands of lives lost.

In addition to sustaining the alliance mission on the ground in Afghanistan, U.S. Ambassador to NATO Doug Lute says, “the second key thing” NATO leaders will deliver on Afghanistan is a funding commitment to support the Kabul government’s army and police until 2020.

Lute told reporters Wednesday the NATO moves are designed to build Afghan government leaders’ confidence and to continue progress that’s been made so far.

Russia’s annexation of Ukraine’s Crimea peninsula, along with its continued support for separatists in Ukraine’s east, have increased NATO’s need to reassure its eastern allies and also take steps to deter further Russian aggression.

“I think one of the greatest keys to deterrence, what would really deter those who would seek to bring pressure on our alliance, is that our entire alliance – the force structure that we already have – becomes more ready and more responsive,” said retired General Philip Breedlove, the former NATO Supreme Allied Commander Europe. He was speaking at an event in Washington last week hosted by the Center for Strategic and International Studies.

To help with the deterrence effort, the U.S., Britain, Germany and Canada are each planning to lead a NATO rotational battalion to be based on the alliance’s eastern flank.

A U.S. official who declined to be identified told VOA Wednesday that President Barack Obama will announce that the United States will lead a battalion in Poland. The other allies will be leading battalions based in Estonia, Latvia and Lithuania.

Lute told reporters the “modest and responsible force presence” of four rotational battalions will complement the key commitment leaders made at the last NATO summit, in Wales, where they agreed to place a larger proportion of allied forces on “a higher readiness standard.”

Based on that decision, the alliance today has about 13,000 troops in Spain who are “ready to move anywhere in alliance territory in just days,” Lute said.

NATO is not fighting Islamic State forces as a bloc; instead, members choose unilaterally to contribute troops to the U.S.-led coalition in the region.

After the terrorist attacks in Paris last year, some called for NATO to invoke its Article 5 collective defense authority to step up the fight against Islamic State extremists. Since that could result in official NATO involvement in Iraq and Syria, analyst Daniel Serwer of the Johns Hopkins School of Advanced International Studies sounds a cautionary note.