Bulgarian head of state President Rossen Plevneliev and the country’s National Assembly have condemned the June 28 terrorist attack on Istanbul’s Ataturk Airport, that left 36 people dead and more than 140 injured.

No one has yet claimed responsibility for the attack, in which three suicide bombers attacked with automatic weapons before detonating themselves, but Turkey’s prime minister Binali Yildirim has said that he suspects terrorist organisation Daesh – the self-proclaimed “Islamic State” – was behind it.

President Plevneliev, in a letter of condolences to his Turkish counterpart Recep Tayyip Erdogan, said that the attack had left him deeply shocked and grieving.

“The Republic of Bulgaria strongly condemns these acts of violence and all forms of terrorism directed against civilians cannot be justified in any way,” Plevneliev said.

Bulgaria’s Parliament opened its sitting on June 29 with a minute of silence for the victims of the attack at Ataturk Airport.

Deputy Speaker Dimitar Glavchev said that the attack was yet another brutal act against freedom and peace. Bulgaria sharply and strongly condemned what was yet another barbaric bombing, he said.

There was no justification for such monstrous violence against innocent people, Glavchev said.

All in Bulgaria deeply mourned the innocent victims of this great tragedy, he said.

“We are certain that this will redouble the efforts of the institutions of civil society and the global democratic community for a more efficient fight against terrorism,” Glavchev said.

Bulgaria’s ambassador to Turkey, Nadezhda Neynski, said that there was no information that there were Bulgarians among the casualties. Assistance had been given to four Bulgarian students who had arrived at the airport on a flight from Vilnius, she said.

The Foreign Ministry said that the Bulgarian embassy in Ankara and the consulate-general in Istanbul were monitoring the situation following the attack and were in continuous contact with the Turkish authorities. 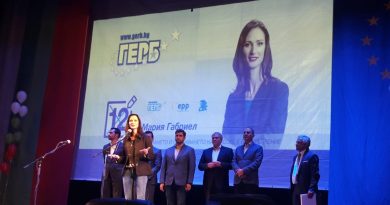