The United Kingdom can require citizens from other European Union countries living in Britain to have a right to reside legally in the UK before being eligible to be recipients of child benefit and child tax credits, the European Court of Justice has ruled.

Although that condition is considered to amount to indirect indiscrimination, it is justified by the need to protect the finances of the host member state, the European Court said, announcing its ruling on June 14 2016.

The regulation on the coordination of social security systems lays down a series of common principles to be observed by the legislation of EU member countries in that sphere so that the various national systems do not place at a disadvantage persons who exercise their right of freedom of movement and of residence within the EU, the court said.

One of the common principles that EU countries must observe is the principle of equality, the court noted.

In the specific field of social security, the principle of equality takes the form of prohibiting any discrimination on grounds of nationality.

The court said that the European Commission had received numerous complaints from non-British EU citizens resident in the UK. They complained that the UK authorities had refused to grant them certain social benefits on the ground that they did not have a right to reside in the UK.

Since the European Commission took the view that the UK legislation does not comply with the regulation, it brought an action for failure to fulfil obligations against the UK.

The Commission said that under UK legislation it must be verified that people claiming certain social benefits – including family benefits such as child benefit and child tax credit – are lawfully resident in the UK.

According to the European Commission, that condition is discriminatory and contrary to the spirit of the regulation since the regulation has regard only to the claimant’s habitual residence.

In response to those arguments, the UK said that the host country may lawfully require that social benefits be granted only to EU citizens who fulfil the conditions for possessing a right to reside in its territory, conditions which are, essentially, laid down in an EU directive.

Furthermore, while acknowledging that the conditions conferring entitlement to the social benefits at issue are more easily satisfied by its own nationals (as they have, by definition, a right of residence), the UK maintains that in each case the condition requiring a right of residence is a proportionate measure for ensuring that the benefits are paid to persons sufficiently integrated in the UK.

In its June 14 judgment, the European Court dismissed the European Commission’s action. The court found, first of all, that the benefits at issue are social security benefits and therefore fall within the regulation’s scope.

The court rejected the Commission’s principal argument, that the UK legislation imposes a condition supplementing that of habitual residence contained in the regulation.

“In this connection, the Court points out that the criterion of habitual residence, within the meaning of the regulation, is not a condition that must be met to qualify for benefits, but a ‘conflict rule’ which is intended to prevent the concurrent application of a number of national legislative systems and to ensure that persons who have exercised their right of freedom of movement are not left without cover.”

According to the European Court of Justice, the regulation does not set up a common scheme of social security, but allows different national social security schemes to exist.

“It thus does not lay down the conditions creating the right to benefits, because it is in principle for the legislation of each Member State to lay down those conditions,” the court’s statement said.

“In this context, the Court states that there is nothing to prevent the grant of social benefits to EU citizens who are not economically active being made subject to the requirement that those citizens fulfil the conditions for possessing a right to reside lawfully in the host Member State.”

As to the argument put forward by the Commission in the alternative, that checking of the right to reside amounts to discrimination, the Court holds that the condition requiring a right to reside in the UK gives rise to unequal treatment because UK nationals can satisfy it more easily than nationals of the other Member States.

“However, the Court considers that this difference in treatment can be justified by a legitimate objective such as the need to protect the finances of the host Member State, provided that it does not go beyond what is necessary to attain that objective,” the court said.

“In this regard, the Court finds that the UK authorities verify whether residence is lawful in accordance with the conditions laid down in the directive on the free movement of citizens. Thus, this verification is not carried out systematically by the UK authorities for each claim, but only in the event of doubt. It follows that the condition does not go beyond what is necessary to attain the legitimate objective pursued by the UK, namely the need to protect its finances.” 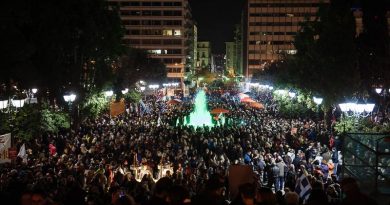 Thousands rally in Athens on eve of EU debt talks