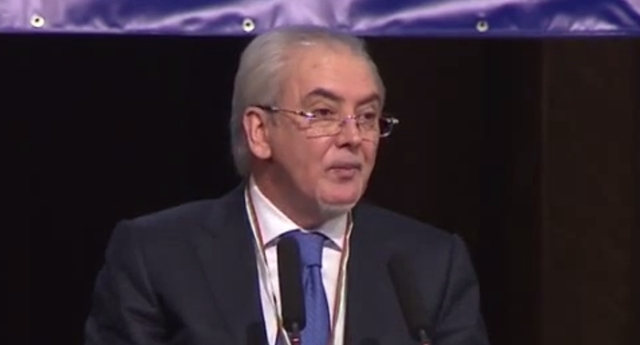 The DOST party founded by ousted Movement for Rights and Freedoms (MRF) leader Lyutvi Mestan held its inaugural conference in Sofia on April 10, with Turkey’s ambassador Süleyman Gökçe and other visitors from Turkey among guests of honour.

Mestan’s party is named, in translation from Bulgarian, “Democrats for Responsbility, Freedom and Tolerance”. Its Bulgarian abbreviation, DOST, is the same as the Turkish word for “friendship”.

Mestan was the leader of the MRF until his ousting in late 2015 by founder and honorary president Ahmed Dogan after Mestan publicly took side of Ankara in its dispute with Moscow over Turkey’s downing of a Russian military aircraft near Turkish airspace.

Accompanied by a handful of former MRF MPs, Mestan has declined to resign from Bulgaria’s National Assembly, and now sits as a backbencher.

At the inaugural conference of DOST, Mestan was the sole candidate for the party leadership post.

A week before the founding congress, Mestan and members of the ad hoc committee on the establishment of the DOST committee visited Ankara, where they held talks with Turkish prime minister Ahmet Davutoğlu.

The MRF, currently the third-largest party in the Bulgarian Parliament, sitting in opposition to Prime Minister Boiko Borissov’s centre-right coalition Cabinet, traditionally has been known since its founding as the “Turkish party”.

The MRF has had only two people in the leadership post in its history – Dogan and Mestan, both former agents for Bulgaria’s communist-era secret service State Security. The ouster of Mestan by Dogan was seen as a display of an upper hand for Russia in the internal politics of the MRF.

According to the DOST press office, Mestan presented Davutoğlu with his analysis of events leading up to the formation of the new party. Mestan told the Turkish prime minister that there was a need for a strategic partnership between Bulgaria and Turkey. DOST would contribute in this regard, Mestan told Davutoğlu.

The DOST party launch was held behind a wall of strict security measures and with considerable interest from the Bulgarian-language media.

Addressing the event, Mestan said that those in the hall were united by “belief in universal Euro-Atlantic values and the deep conviction that the Bulgarian national interest is inextricably linked with Nato and the EU.

“This belief includes in freedom, responsibility and tolerance. I want first of all to thank you for civil valour and courage today to be here in this room, despite the unprecedented repression to which you are subjected,” Mestan said.

Mestan explained that affect the subject of DPS because “the claims of the party to present liberalism of Bulgarian politics.”

At the founding of the party in the NPC Mestan he turned with the words: “I want to thank you for civil valor and courage to be here, despite pressure and repression to which you subjected.”

He said that he was concerned by the topic of the MRF because of that party’s “pretensions to represent liberalism in Bulgarian politics”.

He said that DOST was founded “in the name of the rights of every Bulgarian citizen, irrespective of what language he spoke the word ‘mummy’ for the first time, and what faith he adhered to.

Mestan said that it was not just nationalist and populist nationalist, but also representatives of the “parties within the system from the left-centre-right triad” were subjecting liberalism, multiculturalism and tolerance to unprecedented attack”. They were the main culprits for the severe crisis that Europe was experiencing in the forms of the refugee wave and the terrorism of the “Islamic State”, Mestan said.

DOST firmly asserted itself in favour of liberalism and tolerance, because the alternative was authoritarian regimes, he said.

Apart from being favour of Nato and a European orientation, the party would also be “decisively anti-oligarchic,” Mestan said.

The cause for which the party stood was genuine democracy in which everyone, regardless of their social status and political views, ethnicity, faith and name, would be equal before the law and have a chance for social development and a European standard of living, Mestan said.