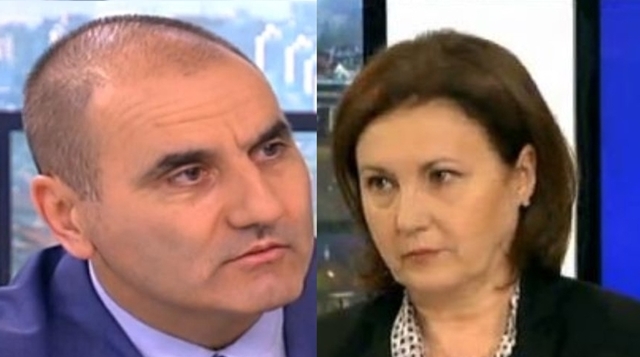 The reforms are a milder version of restructuring police pay than the one that brought Interior Ministry employees out in large-scale protests in late 2015, demanding Buchvarova’s resignation.

Buchvarova, who already had been a deputy prime minister in Boiko Borissov’s centre-right coalition Cabinet that took office in November 2014, was given the Interior Ministry portfolio in March 2015 after the incumbent minister resigned.

Coming from outside the Interior Ministry system, unusually for a holder of the portfolio, Buchvarova has been trying to pilot reforms, to considerable opposition.

The latest Interior Ministry Act draft amendments would see restructuring of pay provisions for Interior Ministry employees to pare back the generous leave and pension provisions, but only for new employees. The previous version, about which police rallied in protest, would also have affected existing employees.

The committee which rejected the bill is chaired by Tsvetan Tsvetanov, who was interior minister in Borissov’s first government from 2009 to 2013 and is a deputy leader of Borissov’s GERB party.

While several Bulgarian-language media reports saw the committee’s rejection of Buchvarova’s amendments as censure of her, Tsvetanov said that this was not the case.

The amendments were voted down because they had the support only of GERB members of the committee. Tsvetanov, though he had criticised the amendments, voted in favour.

The amendments also are opposed by the other two minority partners in the coalition government deal, the nationalist Patriotic Front and socialist breakaway ABC.

Buchvarova’s amendments are not technically dead. In spite of the negative vote in Tsvetanov’s committee, the bill may still be examined by other committees and could still be put to the National Assembly for approval.

One of the critics of the bill is Atanas Atanassov, who was the previous head of the committee on internal security and public order until his resignation when the Democrats for a Strong Bulgaria party of which he is deputy leader broke with the rest of the Reformist Bloc to go into opposition.

Atanassov has called on Prime Minister Borissov to withdraw the amendments to the Interior Ministry Act.

“You cannot announce that you want to carry out reform and that the main motive is to reduce the remuneration of police officers, to reduce their salaries,” Atanassov said. “This is absurd”.

Tsvetanov, denying on April 7 that the vote in his committee the previous day had been a censure of Buchvarova, said that “all involved in the debate had expressed their principle position”. He told reporters that the debate in the committee on the bill “was not politicised”. The opposition had taken a “responsible approach,” according to Tsvetanov.

But, he said, revisions to the amendments were needed before the second reading stage.

Tsvetanov has criticised the bill as not meeting expectations and as not corresponding with the originally-stated intentions of GERB regarding the security sector. “I to this day do not know who proposed this bill.”

At the committee meeting, he criticised several provisions, from the payout of accummulated leave to other financial provisions, which Buchvarova has said would save many millions of leva a year, but which Tsvetanov said would not only lead to huge payouts of leave pay at pension but also to an exodus of employees.

This is not the first occasion on which Tsvetanov has brought down a proposal by Buchvarova. At his initiative, a proposal to legislate the inclusion of an electronic chip in the national identity card was rejected.

Notably, after each clash, Borissov and Tsvetanov publicly have expressed support for Buchvarova.

Bulgarian-language daily Sega quoted Buchvarova as saying that the amendments were not adopted for political reasons and because of misunderstanding on the part of MPs.

Buchvarova, responding to Tsvetanov’s comment about not knowing who wrote the amendments, said that she had participated in writing the bill and the reform was the work of GERB from before she became Interior Minister.

Bulgarian media reports said that unofficial information was that Borissov backed the amendments, taking the side of Buchvarova, and wanted to see them approved by the National Assembly.