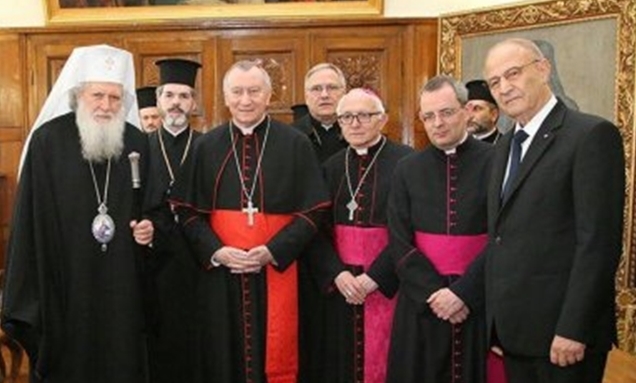 Neofit and Parolin discussed the good relations between the Orthodox Christian Church and the Roman Catholic Church, citing as an example the support that local Roman Catholic dioceses give to Bulgarian Orthodox parishes in Western Europe, according to a statement by the Holy Synod on the March 22 talks.

The Bulgarian Orthodox Church’s Metropolitan Antoniy of Western and Central Europe, among the senior clergy at the meeting, described the co-operation between his diocese and Roman Catholic Church, which provided churches for Bulgarian parishes, while the two churches took part in joint social and educational initiatives.

Parolin inquired how the Bulgarian Orthodox Church was preparing for the Pan-Orthodox Council, to be held in Crete in June. He said that representatives of the Roman Catholic Church would attend the opening of the historic Orthodox Church forum.

Among the issues discussed was the refugee crisis in Europe. Parolin said that it was important to fulfill the gospel commandments to care for the persecuted and suffering.

Parolin, who before coming to Bulgaria visited the Republic of Macedonia, said that one of his objectives in visiting that country was to acquaint himself with the situation on the Greek-Macedonian border and to seek ways to help thousands of refugees seeking assistance and protection for themselves and their children.

Chief Mufti Mustafa Hadji, spiritual leader of Bulgaria’s Muslims, told Parolin: “We live in a time in which religions are too often used for selfish purposes. In this sense, we, religious leaders are called to elevate the authority of faith and religion in society. Religious feelings are personal and inviolable, so everyone is free to choose their beliefs”. 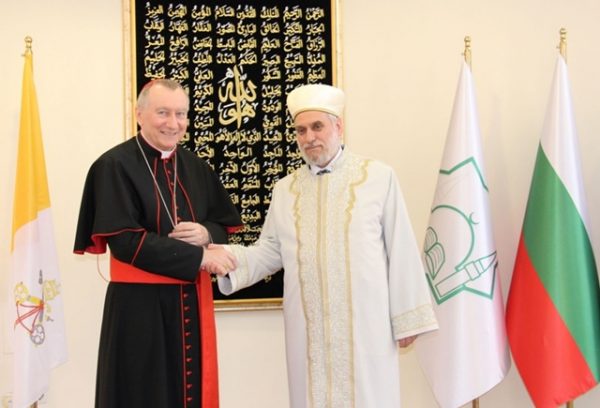 “We share the philosophy that religion is above politics, but not in the sense that it should not interfere in it, we do not want politics to interfere in religious affairs. This does not preclude good relations,” Hadji said, according to a statement by the Chief Mufti’s office.

Parolin said that religion was a fundament in human life. “In this sense, I share your philosophy that it should not be used for selfish goals because that would alter our true aim, which is the ministry of God,” he told the Chief Mufti, adding that he was familiar with his active contribution to dialogue among religious denominations.

“Dialogue between religions is very important, given the fact that it has a natural ability to prevent and to lead to the resolution of international conflicts,” Parolin said. He said that this was a very broad platform that requires joint efforts by the religions of the world.

Hadji said that in Bulgaria, a model of mutual respect and cooperation between religions had been built within the National Council of Religious Communities in Bulgaria.

(Photos: Bulgarian Orthodox Church Patriarchate, and the Office of the Chief Mufti) 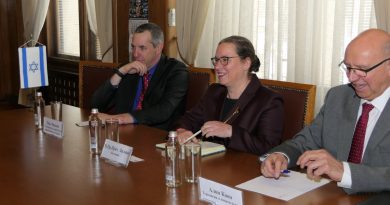