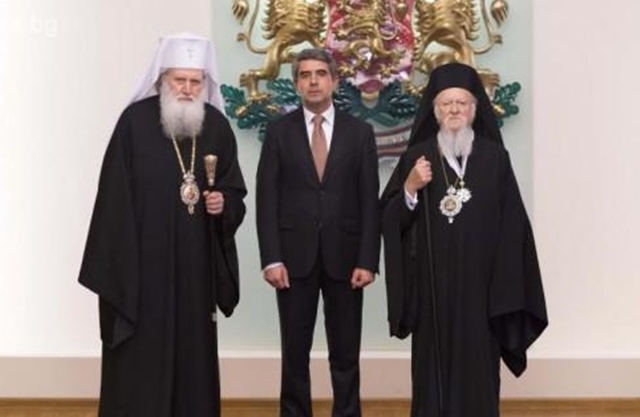 A visit by Ecumenical Patriarch Bartholomew I to Bulgaria ended with eyebrows raised as a meeting with Prime Minister Boiko Borissov was cancelled – as was a joint news conference with Bulgarian Orthodox Church head Patriarch Neofit.

No reasons were given for either cancellation.

The visit to Bulgaria by Bartholomew, the “first among equals” of leaders of mainstream Orthodox Christian churches, from November 7 to 10, included a joint liturgy with Neofit and a ceremony at which head of state President Rossen Plevneliev conferred on Bartholomew the country’s highest state honour, the Stara Planina First Class.

But after Bartholomew publicly raised the issue of valuable church liturgical items missing from places of worship in northern Greece since the Balkan Wars, there was a last-minute announcement that the news conference with Neofit had been called off. A few hours later, the goverment media service said that Bartholomew and Borissov would not be holding the meeting that had been scheduled for November 10.

Bartholomew had said that he was using the good opportunity of his visit and the long-created “climate of mutual trust, friendship and sincerity” to raise the issue that the Ecumenical Patriarchate wants the return of sacred liturgical valuables seized during the “wars and confusions” of the Balkan Peninsula.