The European Parliament has backed a plan to distribute some 120,000 refugees among European Union member countries in an effort to relieve overcrowding in EU border nations that are the first stops for migrants seeking asylum.

EU lawmakers voted to approve the measure Thursday 372 to 124, with 54 abstentions. The next move is for EU interior ministers to approve the plan, provided they can change the position of eastern European nations that are against it.

Faymann said after the meeting that this is the time to prove that Europeans “do not want a Europe in which everyone will try to shift their problems to others’ shoulders.”

Faymann was to discuss the migrant crisis with his Croatian counterpart Prime Minister Zoran Milanovic Thursday in Zagreb. Milanovic has promised to allow the migrants free passage through Croatia.

Croatia says some 5,600 migrants have entered the country since Hungary sealed its border with Serbia earlier this week.

As Hungary closed its border crossing, nearly 900 migrants streamed into the EU through the cornfields of Croatia.

Authorities urgently dispatched de-mining experts to the border region to mark minefields left from the Balkan wars of the 1990s.

Croatian Prime Minister Zoran Milanovic is to discuss the matter with his Austrian counterpart, Chancellor Werner Faymann, Thursday in Zagreb. Milanovic has promised to allow the migrants free passage through Croatia.

Croatian Foreign Minister Vesna Pusic said late Wednesday that Croatia is ready for the arrival of thousands of migrants, but cannot cope with tens of thousands of them.

Ban said the migrants “were people fleeing war and persecution” and that “they must be treated with human dignity.”

Serbian Prime Minister Aleksandar Vucic also condemned what he said was Hungary’s “brutal treatment” of the migrants.  Police clashed for hours with the migrants after blocking one of the biggest entry points into the European Union.

But Hungary defended its decision to close the border, saying it was protecting its territory against the influx of migrants looking for better economic opportunities, not fleeing persecution in their homelands.

Hungary said the migrants were trying to push their way past the border fence and presented a danger to the country.

In the first case involving Hungary’s tough new anti-migrant laws, a court Wednesday convicted an Iraqi man of illegally crossing the border fence with Serbia the day before, ordered him expelled and banned him from Hungary for a year.

More migrants sought entry to the European Union elsewhere, walking from Salzburg, Austria, into Germany, or through Lithuania on their way to Scandinavian countries.

While welcoming several hundred thousand refugees, German Chancellor Angela Merkel’s Cabinet called for expansion of the country’s naval operations in the Mediterranean, to block human traffickers from ferrying more migrants from Libya and elsewhere in rickety, overcrowded boats to the shores of Greece and Italy.

If the German parliament approves, up to 950 military personnel could be used in the operation. 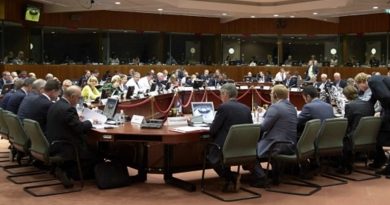 After MH17, EU to expand sanctions against Russia over Ukraine to include more individuals and entities