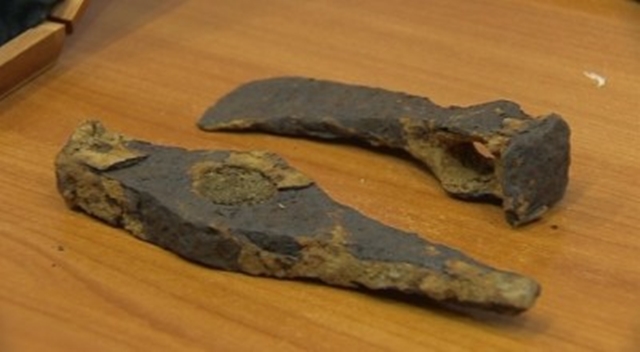 Archaeologists working at the ancient sacred site of Perperikon in Bulgaria have found four silver coins from the time of Tsar Ivan Alexander, three rings from the Roman and medieval era and a Thracian Rhomphaia sword.

With the archaeological season still with several weeks to go, this season at Perperikon has seen the long-awaited discovery of the central square on the rocky heights.

The Thracian-era Rhomphaia weapon is the 13th of its kind found during archaeological digs in Bulgaria. Honed on one side, it was often used for direct attack or for severing the tendons of horses in battle. The sword is 142cm and a more precise date is still being established.

The new finds are already on display in Perperikon for viewing by tourists. The entire western sector of the site is open for tours.

Other archaeological sites in Bulgaria that have seen interesting finds in July 2015 include Gradishte near Vratsa, where a range of coins have been found, starting from Roman coins from the first half of the third century and ending with Turkish silver coins, the akçe, which was the principal monetary unit of the Ottoman empire.

Expedition leader Nartsis Torbov said that other coins found included some from the early Byzantine era and medieval Bulgarian coins. One of these was typical for north-western Bulgaria, a coin of Serbian king Stefan Uroš II Milutin, which was an imitation of Venetian coins called matapano. Also found was jewellery, of iron, bronze and silver.

Earlier in July, archaeologists working on the Gradishte site’s ninth season said that they have found a grave from a medieval necropolis site.

Alexandra Petrova of the History Museum in Vratsa said that what was interesting about the necropolis was that it was the first medieval city necropolis found inside the protective wall. The grave found on July 2 was in close proximity to the wall, two to three metres.

The grave was of an adult who had been buried according to Christian rites, with body laid out, orientated west-east and arms crossed over the body.

Meanwhile, the site at Pliska, one of Bulgaria’s ancient capital cities (from 681 to 893CE), has seen excavations at the site of the sacred well of the Great Basilica. Steps were being taken to pump out the system to clear the well and enable it to work.

Also found at Pliska was the lead seal of a Byzantine commander. The seal was discovered in the foundations of a previously unknown palatial building, near a circular arena built of stone, Bulgarian National Television reported.

The building resembles the late stone palaces in the medieval Pliska. So far, archaeologists have explored 900 square metres of it and found a lot of similarities with Khan Krum’s Palace.

The finds include coins and several seals, one of which belonged to a Byzantine commander. One side of the seal depicts an image of an emperor, while the other has an inscription.

In the Shoumen region, archaeologists said on July 12 that they had discovered unique figures from the early times of the settlement, 10 clay idols said to date from the early Neolithic era, some male, some female and some bearing characteristics of both sexes.

Elsewhere, work on a large-scale water project in Silistra led to the discovery of 23 new archaeological sites, Bulgarian National Radio said on July 4. The finds were made during excavations for a pipeline.

Archaeological excavation head Professor Georgi Atanassov said that the finds included a previously unknown fortification of ancient Dorostorum, a medieval building, a Roman building of more than 35 metres, many “new” paintings: “Never in Dorostorum have so many frescoes been found,” Atanassov said.

Seventy-five per cent of the water project is in the Dorostorum Drustur archaeological reserve.

Almost daily, those working on the project were uncovering layers of history, and archaeologists from Shoumen and Dobrich had come to the site. According to Bulgarian National Radio, archaeologists were trying to work as quickly as possible to not hinder work on the water project.