State institutions and prosecutors should be completely free to take action against politicians who use hate speech, Bulgarian President Rossen Plevneliev said in a comment on the situation in Garmen, scene of ethnic tensions between Bulgarians and Roma people.

Plevneliev did not specify which politicians he was referring to.

The south-western Bulgarian municipality of Garmen saw clashes on May 23 that left several people injured and resulted in arrests after a fight between Bulgarians and Roma people.

It has become a national political issue, with all parties commenting, especially the country’s nationalist parties that have “gypsy crime”, as they put it, as a signature issue.

On May 27, the Patriotic Front listed among its demands, meeting of which it made conditional for its continued support of the coalition government, “adequate steps” in Roma neighbourhood. Its rival, Ataka, also has a long record of condemning Roma people.

Asked about the Garmen issue the same day, Plevneliev said that institutions should ensure that the rules apply to all and have the objective of taking the side of the law and the constitution.

Plevneliev said that the problem in Garmen is complex and tension there is the result of many years of unresolved problems regarding illegal construction, in unfulfilled promises to the various communities, in the irresponsible use of hate speech.

He said that anyone who violated the rules should bear the responsibility.

“Let us change, and change begins in giving complete freedom of institutions and prosecutors to intervene against those politicians who use hate speech,” he said.

“When citizens see that the rules apply to everyone, then everyone will follow the rules,” Plevneliev said.

“Much of the criminal actions of Bulgarian nationals are based on poor economic outlook, so the problem is social in Garmen. The problem is political, because many politicians in Bulgaria used absolutely irresponsible language of hatred,” he said.

The same day, protesters in Garmen – whose ranks have been swelled by people from other towns and cities along with football fans customarily linked to far-right political groupings – held their latest protest in front of the municipality, then marched to the point where police are guarding access to the Roma neighbourhood of Kremikovtsi.

The protesters repeated their demand for action against illegal construction in the neighbourhood. When the protests began, participants said that if the state did not proceed with demolitions, they would do so themselves.

Earlier this week, Interior Ministry chief secretary Georgi Kostov told the media that a check had found that most of the construction in Kremikovtsi was legal.

On May 27, Garmen mayor Minka Kapitanova said a check by police and municipal administration officials had not found irregularities in the address registrations of people in the Roma neighbourhood.

According to a report by Bulgarian National Television, people in the Roma neighbourhood said they want to talk to people of Garmen, to understand each other and live together again as before.

But Ivan Kremenliev, of the steering committee organising the protests, said that the protests would continue.

He said that the committee had met the mayor and had learnt that the municipality “had nothing to do” regarding meeting its demands.

“She (the mayor) cannot do anything. The municipality is powerless,” Kremenliev said.

In Garmen, like several other municipalities in Bulgaria, there have been allegations that large numbers of Roma people have been moved in by political forces who want to use them to manipulate the outcome of the vote in the municipal elections to be held in the autumn.

In the case of Garmen, this allegation has been levelled against Kapitanova’s predecessor and expected rival for the mayoral seat, an allegation he denies. 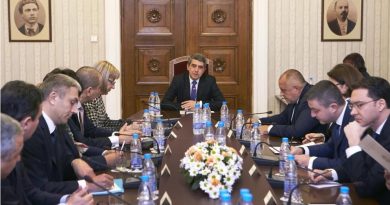