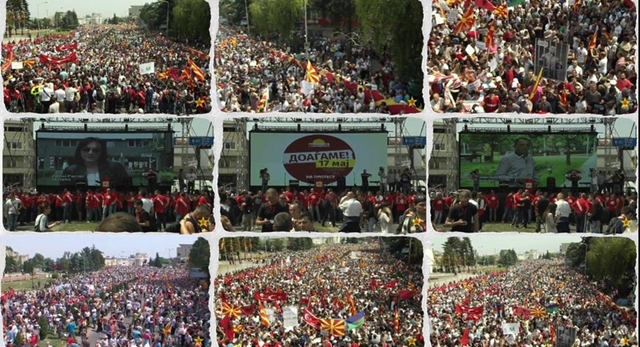 Thousands of Macedonians rallied in the capital Skopje on Sunday, calling for the resignation of Prime Minister Nikola Gruevski as the Balkan country faces a deepening political crisis.

Pressure on the leader has been building since a wire-tapping scandal broke earlier this year, prompting questions about how tightly the government controls the media, judges, and elections during Gruevski’s nine years in power.

The protests come a week after tensions flared north of the capital. Clashes between gunmen and police in the city of Kumanovo earlier this month killed eight policeman and 14 assailants.

Macedonian authorities have said the gunmen were trying to cause chaos and fear, but Albanian sources in the country said authorities instigated the clash to save the Gruevski government.

The prime minister called for his own rally, scheduled for Monday.

Macedonia narrowly avoided a 2001 civil war, when an ethnic Albanian armed uprising demanded greater political rights. The insurgency lasted for months before a cease-fire was reached.