Turkish authorities have tightened controls, ending their open-door policy for Syrian refugees and making it more difficult for Syrians to enter Turkey and for international journalists to cover the war. There are even reports of people being fired upon as they approach the border.

Lina Chawaf is the editor of the independent Syrian radio station “Rozana,” which broadcasts from studios In Paris and Gaziantep, Turkey.  She was a well-known TV personality in Damascus until she fled after siding with the political opposition against President Bashar al-Assad as violence flared in 2011.

She has been returning to rebel-held areas of northern Syria when possible.

But trying to see what reporters call “ground truth” can be perilous.

Barrel-bombs are raining down on Aleppo, the battered northern Syrian city half-held by rebels. And there is the danger of journalists being kidnapped by jihadist groups like al-Qaida affiliate Jabhat al Nusra.

But there are also risks in just entering Syria and then trying to return to Turkey.

Four Western reporters were deported last week after being caught trying to enter Turkey following reporting assignments inside Syria. The Turks closed border gates in March, claiming intensified fighting near the border had forced the move.

About 20 minutes by car from the border gate at Kilis more than 500 civilians were trying to use a cross-border tunnel 700 meters long, three meters deep and three meters across.

“We went there and everybody knows that al-Nusra is controlling this area. They ask about what we are doing there and then they are trying to help us get just to the tunnel. And when we begin to walk to the tunnel, shooting was beginning over our head,” Chawaf said.

The shooting came from Turkish guards trying to deter refugees from reaching the tunnel. The refugees dashed to the tunnel.

“There are children, families, small children. The children are crying. There is a small girl just beside me when I go down and she was crying,” she said.

About 160 kilometers east, Kurdish refugees who returned to the ruined city of Kobani, which endured a months-long siege by the Islamic State group, find that everyday life is hopeless, with no running water or electricity, bombed-out houses and little food. Unexploded ordnance is scattered around and bodies are buried in the rubble of collapsed houses, posing a health risk as summer approaches.

Returning to the Turkish border area here is as equally hazardous as at the Kilis border gate.

Mustafa, a father of seven, returned to Kobani illegally to see whether the family could move back. He realized they couldn’t and says the journey back to the Turkish border, again illegally, was harrowing involving going 10 kilometers east of Kobani, then a quick march over three kilometers of uneven ground in the dark before running 200 or 300 meters.

If caught, refugees risk a beating and having  money taken from them by the Turkish border guards. 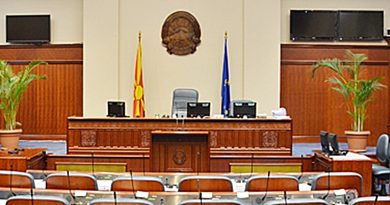 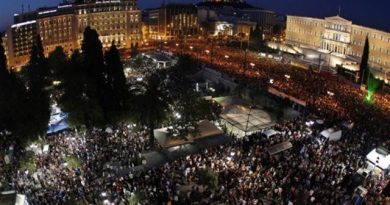 Rallies in Greece ‘against the blackmail of the lenders’