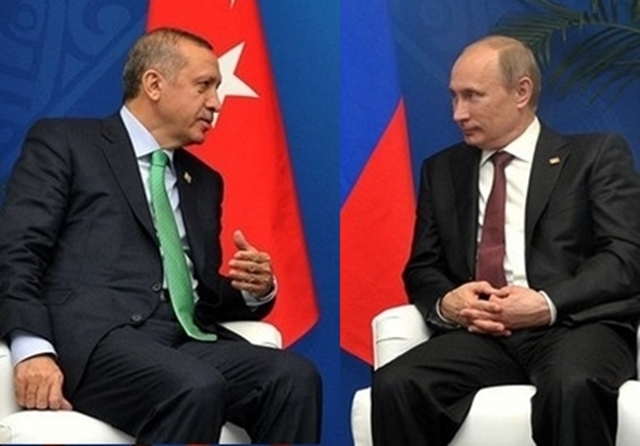 A few months ago, bilateral relations between Turkey and Russia were on the upswing, buoyed by a close bond between their two presidents. Now, there is speculation that a serious rift is developing between the two countries, although powerful economic ties remain a unifying force.

Fueling the speculation was President Vladimir Putin’s backing of Armenia’s genocide claims against Turkey, along with Ankara’s refusal to attend Moscow’s World War II commemorations and intensifying rhetoric by both sides.

Ankara has been engaged in a diplomatic war of words with Moscow since Putin’s comments last month backing Yerevan’s claims that Ottoman Turkey committed genocide against its Armenian minority. And Turkish President Recep Tayyip Erdogan joined many Western leaders in staying away from Russian celebrations marking the end of the Second World War.

“We need no lectures on genocide from a country that, in the past, committed a century of massacres and ethnic cleansing,” the Turkish president declared.

Semih Idiz, diplomatic columnist for Turkey’s Taraf newspaper and the Al Monitor website, said there has been a remarkable reversal in bilateral relations.

“Until quite recently they were shown as exemplary relations,” he said. “But they seemed to have hit rock bottom at the moment. And the best indication of that is Mr. Erdogan refusing to go to the May victory celebrations in Moscow. This whole impression that somehow Mr. Erdogan and Mr. Putin are bosom buddies — I think that has been shattered at the moment.”

In December, Ankara gave Putin a full state welcome, during which the Russian president described Turkey as a strategic partner. During that visit, Putin canceled a natural gas pipeline running through Bulgaria to Europe and announced plans to build a new pipeline through Turkey called “Turkish Stream.”

Volkan Ozdemir, an analyst for the Ankara-based Institute for Energy Markets and Policies, said such projects, along with wider trade, will be safe from the rising bilateral tensions.

“I don’t see any relation between these political tensions and natural gas pipeline projects or deals including Turkish Stream,” he said. “A Turkish and Russian bilateral relation is based on mutual economy interests, not strategic alliance. Russia is the first partner of Turkish imports and on the other hand, Russia serves as a big market for Turkish goods.”

Such developments, observers say, are likely to come as a disappointment to Ankara’s Western allies, who have voiced concern over the pipeline as they work to economically isolate Moscow because of its policy toward Ukraine.

Ankara has refused to enforce any of its allies’ sanctions against Moscow and has been muted in its criticism over Ukraine.

Soli Ozel, an International relations expert at Istanbul’s Kadir Has University, said Ankara’s latest spat with Moscow has exposed the unbalanced nature of the relationship.

“The Russians have not been at all forthcoming in terms of respecting where Turkey has interests,” said Ozel. “So I don’t see the Russians being particularly careful about not upsetting, offending or whatever the Turks, whereas the Turks have been usually pretty careful. This is, in my judgment, a relation of unequals.”

Ozel pointed out that Ankara did not even recall its ambassador from Moscow, as it did with Austria, the Vatican and most recently Luxembourg when they backed Armenian genocide claims. But diplomatic columnist Idiz said with Ankara finding itself increasingly isolated, it can ill afford to alienate powerful allies.

“Ever since the Arab Spring it has started losing friends and allies in the region and in the West,” he said. “It has also to do with, a little, Mr. Erdogan’s rather abrasive tone and his pro-Islamic Brotherhood attitude. So, yes, isolation is the order of the day for Turkish foreign politics at the moment.”

A senior Turkish presidential adviser described the country’s foreign policy as “precious isolation.” However, observers say that policy appears to have limits when it comes to countries like Russia — something that President Putin appears to be well aware of.