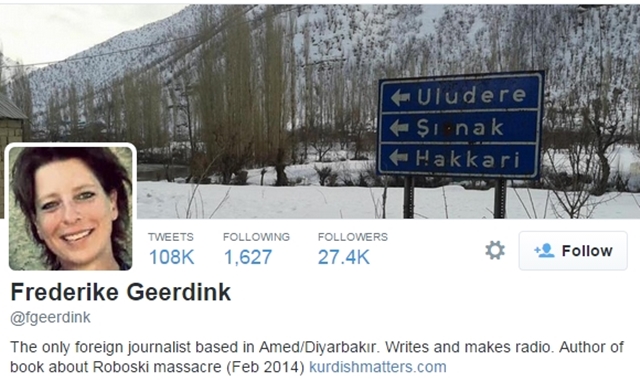 A Turkish court will try a Dutch journalist on charges she disseminated “terrorist propaganda.” The indictment could further strain relations between Ankara and Brussels and raise concerns that state pressure on journalists is extending to foreign journalists working in Turkey.

Freelance journalist Frederike Geerdink is accused of posting messages on Facebook and Twitter in favor of the outlawed Kurdistan Workers Party, a charge the Dutch journalist denies.

Human rights groups in Turkey and other nations have condemned the prosecution.

Andrew Gardener, a researcher on Turkey for Amnesty International, said the court case is part of a worrying trend of intimidation against foreign journalists working in Turkey.

“Increasingly, international journalists working in Turkey have faced threats as the result of their work,” he said. “That includes being targeted at demonstrations when they cover the event there. So the fact an international journalist is now being the subject of a criminal prosecution is a new development. It is something that has happened very rarely in the past. And, it is something that is very concerning and is a testament to the deteriorating situation of freedom of expression in Turkey.”

But Turkey’s justice minister, Bekir Bozdag, has strongly defended the prosecution, saying no one is above the law. He said that as is the case elsewhere in Europe, anti-terror laws are needed to protect Turkey.

“In Europe, if a Turk made propaganda in support of a terrorist organization, would they not face prosecution? Turkey is facing unfair criticism over the detained journalist,” he said.

Geerdink is set to join the ranks of scores of Turkish journalists who have been prosecuted under Turkey’s much-criticized anti-terror laws. Political scientist Cengiz Aktar of Istanbul’s Suleyman Sah University said the laws are deliberately unclear.

Out of 180 countries, Turkey ranks 154th in press freedom, according to a 2014 ranking by Reporters Without Borders, a Paris-based rights group. And last month, U.S.-based Human Rights Watch and Freedom House both cited concerns about deteriorating media freedom.

The prosecution of Geerdink will most likely further damage Ankara’s bid to join the European Union, Aktar warned.

“The Europeans are taking note of all this, but the Turkish government dismisses all reports coming from the EU,” Aktar said. “The latest one was a very critical report by the European Parliament, and it was just about the freedom of media. And the report was officially dismissed by Turkish authorities, who said it is not considering itself accountable to the European Union and its membership talks regarding the basic rights.”

With Ankara’s membership bid all but frozen because of opposition from some EU members, Brussels has few sanctions to impose on Turkey, other than ending the membership process. But, analysts said, that is likely not to happen, because EU leaders realize Turkey remains an important strategic ally in dealing with the threat posed by jihadists across the border in Syria and Iraq.

Still, they warned that with Geerdink due to appear in a Turkish court in April, that prospect can only add to concerns that Turkey and Europe are drifting apart.