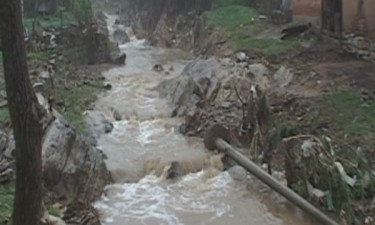 An emergency was declared in the Saedinenie municipality in the Plovdiv region on December 9 as heavy rains and floods continued in southern Bulgaria, while there was snowfall in the north-western and central parts of the country.

In the Saedinenie municipality, torrential rain caused three dams to overflow and the Potoka river to burst its banks, flooding the industrial part of the town. There were close to 100 reports of flooded gardens, ground floors and basements.

The situation in the municipality of Rakovski in the Plovdiv region also was reported to be critical.

In the village of Belozem, dozens of houses and agricultural land were flooded.

Electricity distribution company EVN, responsible for power supply in southern Bulgaria, said that its crisis staff were at work responding to the consequences of the weather in south-eastern Bulgaria.

The company said that at present, the power supply situation was normal, with the exception of Gulubovo in the Stara Zagora region, where a backup system was in operation. Power supply to Gulubovo previously was seriously disrupted by heavy rainfall that affected a substation owned and operated by the Electricity System Operator.

Power distribution company CEZ said on December 9 that electricity was cut in several residential areas of the town of Vratsa because of a bad weather conditions that caused an ESO substation to fail.