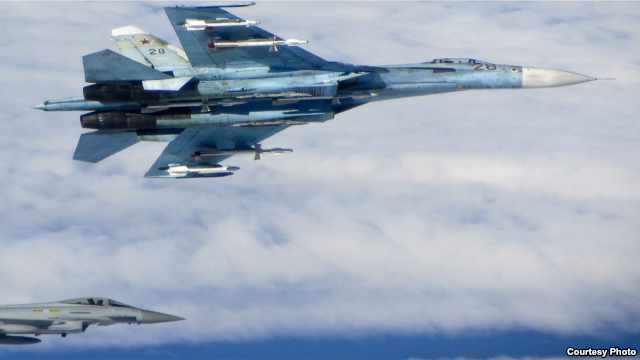 Russia’s provocative military actions toward Western countries, including NATO members, is at Cold War levels and the risky strategy could prove catastrophic, according to new report.

In a report released on Monday, the European Leadership Network (ELN), a London-based think tank, gathered details of and mapped almost 40 specific incidents over the past eight months.

“These events add up to a highly disturbing picture of violations of national airspace, emergency scrambles, narrowly avoided mid-air collisions, close encounters at sea, simulated attack runs and other dangerous actions happening on a regular basis over a very wide geographical area,” write the authors of the report, entitled Dangerous Brinkmanship: Close Military Encounters Between Russia and the West in 2014.

Some of the incidents were labeled serious because of “aggressive or unusually provocative nature, bringing a higher level risk of escalation,” according to the report.

Three of those incidents stood out, including a near miss between a Russian surveillance plane and a civilian airliner, the abduction of an Estonian intelligence officer and the alleged appearance of a Russian submarine in Swedish waters that set off a major submarine hunt.

President Barack Obama has been adamant about defending NATO allies.

“We will defend our NATO allies, and that means every ally,” he said during a visit to Estonia in September. “In this alliance, there are no old members or new members, no junior partners or senior partners. They’re just allies, pure and simple.”

“The Russians quit testing our resolve,” he wrote in an email.

“I personally believe that these Russian actions today need a response much like [the] “broken windows” theory in New York City,” he said. In essence, the theory states that by taking care of small issues, larger problems can be avoided.

While some of Russia’s actions are a throwback to the Cold War, analyst Douglas Barrie of the International Institute for Strategic Studies, a UK-based international security think tank, says Russia is not nearly as powerful as it was decades ago.

“What NATO are now faced with isn’t a Soviet-era size air force,” he said. “The Russian Air Force is significantly smaller, significantly less capable than the Soviet Air Force was in the 1980s.”

Barrie said the actions show a level of “ambition within the Russian elite.”

Still, ELN urges caution, including calling on Russia to re-evaluate its more assertive posture, calling for both sides to exercise military and political restraint and improve military-to-military communication and transparency.

“Even though direct military confrontation has been avoided so far, the mix of more aggressive Russian posturing and the readiness of Western forces to show resolve increases the risk of unintended escalation and the danger of losing control over events,” the authors wrote.

VOA’s Al Pessin contributed to this report from London.

(A Russian SU-27 Flanker aircraft banks away with a RAF Typhoon in the background. RAF Typhoons were scrambled on June 17 to intercept multiple Russian aircraft in international airspace as part of NATO’s ongoing Baltic Air Policing Mission.)