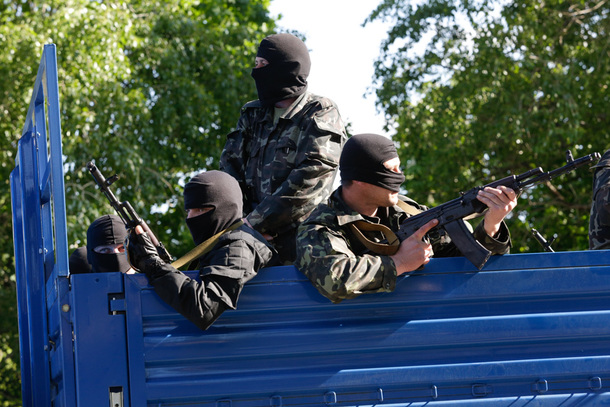 Stoltenberg called for Russia “to make genuine efforts towards a peaceful solution … to the difficult situation in Ukraine.”

Mogherini said the European Union would assess the situation and decide to strengthen or ease sanctions imposed on Russia.

Earlier Tuesday, a pro-Russian rebel leader was sworn in as the head of a self-declared “people’s republic” in eastern Ukraine, following elections condemned by the United Nations, the United States, the European Union and Kyiv as illegal and destabilizing.

The swearing-in of Alexander Zakharchenko as prime minister of the so-called Donetsk People’s Republic is set to worsen a standoff with Ukraine that has already killed 4,000 people since April.

In a meeting with his security chiefs Tuesday, Ukraine’s President Petro Poroshenko said that his country “remains a firm supporter of the peace plan … but other participants” of the Russian-supported truce accord, are not meeting their obligations.

On Monday, Poroshenko also called the vote a farce that violated a September cease-fire with the rebels.

“The pseudo-elections are a brutal violation of the Minsk Protocol of September 5,” he said. “The Minsk Protocol provides for the holding of early local elections in the area of Donbass solely under the laws of Ukraine. We provided them with the given opportunity. The farce of November 2 jeopardizes the entire peace process, the beginning of which has been achieved at the coast of outstanding efforts.”

Poroshenko said he plans to cancel parts of the peace plan that would have offered a degree of autonomy to the areas held by the rebels.

The United Nations, the United States and the European Union have all rejected the vote and say they will not recognize the outcome.

A statement Monday from the White House said, “These sham elections contravened Ukraine’s constitution … and the most basic electoral norms,” while the State Department warned Moscow that “if Russia were to recognize the so-called elections, it would only serve to isolate it further.”

Speaking in Vienna, U.N. Secretary General Ban Ki-moon called the election “unfortunate and counterproductive,” adding the situation in Ukraine remains a matter of great concern.  Mr. Ban urged all parties concerned to “urgently recommit to the letter and spirit of the Minsk protocol and memorandum.”

In Berlin, German Chancellor Angela Merkel expressed her displeasure about Russia’s role in the conflict and said there is no reason yet to lift EU sanctions against Moscow.

Although Russia has not recognized the independence of restive eastern Ukraine, its endorsement of the elections’ validity exacerbated even further Moscow’s relations with the West.

U.S. Air Force General Philip Breedlove, in a briefing with reporters, said Moscow’s interference in the Ukraine crisis threatens to create what he called “a frozen conflict.”

Breedlove said he believes there are as many as 300 Russian troops inside Ukraine training and equipping rebels, and said about seven Russian battalions remain poised on the Russian side of the Ukraine border.  He also warned that Moscow is effectively working to shift that border westward into Ukraine territory.

Moscow has denied any direct role in the uprising, which began when pro-Russian rebels took up arms against the Kyiv government in April. The Kremlin has described Russian soldiers fighting alongside rebels in Ukraine’s east as volunteers.

It was not clear Monday whether Moscow would formally recognize the rebel-held territories. But a Russian deputy foreign minister said the newly elected leadership in Luhansk and Donetsk now has a mandate to negotiate with the Kyiv government.