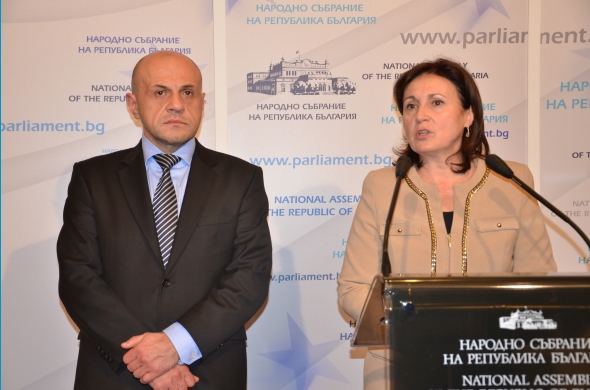 A meeting of more than five hours on November 2 between negotiators from Boiko Borissov’s GERB party and the Reformist Bloc produced a draft statement on a government programme but talks on cabinet posts are still ahead.

Ahead of the meeting, in what apparently was intended as an illustration of GER B’s keenness to ward off holding further early elections, GERB negotiator Tomislav Donchev said that the party would back having the Reformist Bloc’s Radan Kanev as prime minister in the event of discord over who would head the government.

Kanev told reporters that the option of fresh election was “not a good one”.

Negotiations between GERB, winner of the largest share of seats in Bulgaria’s new Parliament, and the Reformist Bloc, a centre-right minority coalition, are to proceed in coming days.

Donchev, speaking after the meeting, said that it still remained for the Reformist Bloc to put forward their views on the structure and personnel of a future cabinet and the areas for which they were prepared to bear responsibility.

The lack of clarity on these points stood in the way of preparing a coalition agreement, which Donchev said was the next necessary step towards coming up with a government.

Donchev said that the meeting had ended with a common document expressing the will, vision, objectives, principles and priorities shared by GERB and the Reformist Bloc.

This would be edited overnight on November 2 and presented to the two sides for approval on November 3.

In turn, the text of this joint document would be presented to the Patriotic Front and ABC.

GERB’s most recent plan for a government has been to form a coalition cabinet with the Reformist Bloc, with the nationalist Patriotic Front and ABC providing support in votes in Parliament.

“I hope that at this stage, the text will come into the public domain,” Donchev said.

“We respect the need to proceed with further internal consultations, but the clock is ticking away very mercilessly. If we have a strong political formula, we have no reason to linger and wait.

“If we will have a government, there is no need to wait until the final deadline. If there is agreement, preparedness, common will, we will be able to bring a proposal to the National Assembly about a cabinet earlier than the period provided for in the constitution, “he said.

Reformist Bloc parliamentary group co-leader Meglena Kouneva, who was among the bloc’s representatives at the November 2 talks, said that if the programme declaration was accepted, this would provide sufficient security and it would make sense to put in place a sound government of Bulgaria.

She said that all that would happen overnight were “editorial adjustments” and both groups would look at the draft by noon on November 3.

According to Kouneva, the draft statement dealt with 20 separate topics related to individual priorities.

Asked whether a possible Kanev premiership had been discussed, Kouneva said that it had not. “This is interesting, but we focussed on the programme statement,” Kouneva said.

She said that if the programme statement was accepted, the next step would be to find the right people to implement the programme.

Separately, November 2 media reports said that the Reformist Bloc, which has 23 MPs, had been at risk of splitting into separate groups in the National Assembly over the issue of involvement with a GERB government.

Other media reports added that in spite of denials, names of possible cabinet ministers were being exchanged, as well as objections from potential supporters such as the Patriotic Front to individuals who might be named to a future cabinet. There were also conversations going on about changes to the structure of the cabinet, such as splitting the economy, energy and tourism portfolio into three individual ministries.