Ukrainian president Petro Poroshenko visits Washington this week amid a shaky cease-fire with Russian-backed separatists, the ratification of an EU pact, and moves to grant self-rule to eastern Ukraine. As he tackles a range of challenges, the Ukrainian leader is expected to press for greater US support during talks Thursday with president Barack Obama at the White House.

Taxed and tired, out-manned and out-gunned – Ukrainian forces for months have struggled to beat back heavily-armed Russian-backed rebels, who show no signs of ending the violence despite the September 5 cease-fire deal.

Though President Barack Obama has pledged full U.S. commitment to Ukraine throughout the conflict, he has not wavered in his perception that a lasting settlement will not be achieved by force. “I think it is very important to recognize that a military solution to this problem is not going to be forthcoming,” said Obama.

During his visit to the White House Thursday, Ukrainian President Petro Poroshenko is expected to press for additional military support, including ammunition and small arms. So far, the United States has pledged some $70 million in aid to Ukraine in the form of body armour, communications equipment and rations.

But instead of lethal aid, President Obama has imposed sanctions against Russia – the latest announced last week – to “increase Russia’s political isolation as well as economic costs” to the country.

“They are not the same as boots on the ground. They are not the same as a military response, and they haven’t necessarily stopped Putin from doing what he wants to do from a geostrategic standpoint. But at this stage, when we are at a cease-fire/pseudo-stalemate, the sanctions are beginning to bite,” said the Washington-based Wilson Center’s William Pomeranz.

But, Pomeranz added, if President Poroshenko is looking for more from the U.S. and the EU, he may end up disappointed — particularly when it comes to financial aid to rebuild his war-torn country, which already faced deep-rooted corruption and other economic problems before the conflict began.

“The US simply does not have the resources and is not willing to provide the extra resources to Ukraine in this crisis. So on top of all the difficulty that Ukraine faces, it also now realizes that it pretty much will have to go this crisis alone,” said Pomeranz.

Experts say that with the fight against the Islamic State militants now at the forefront of the Obama administration’s foreign policy, it is unclear how much more attention the United States will be able to give Ukraine over the long term. 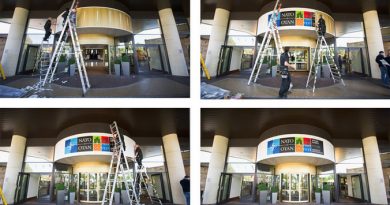