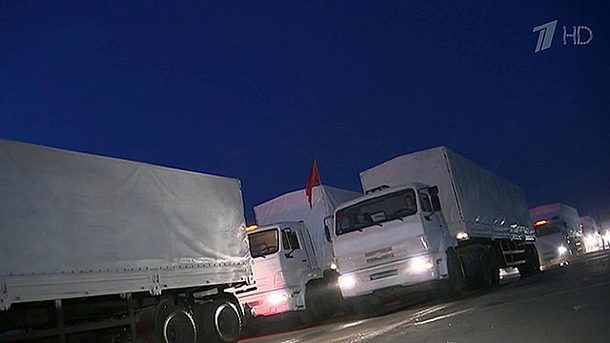 Witnesses say the first trucks from a Russian aid convoy crossed the border into Ukraine after Moscow said it was tired of waiting for Kyiv’s permission to move forward.

Russia’s foreign ministry said in a statement Friday that all excuses for the delay have been “exhausted” and that the convoy was heading toward the eastern Ukrainian rebel stronghold of Luhansk, where pro-Russian rebels are fighting government forces.

The International Committee of the Red Cross said Friday it is not escorting the convoy because it has not received “sufficient security guarantees” from the “fighting parties.”

“The Russian aid convoy is moving into Ukraine, but we are not escorting it due to the volatile security situation,” the ICRC said in a post on Twitter.  The Red Cross said its team in Luhansk reported “heavy shelling overnight.”

Ukraine’s state security chief said on Friday that the convoy crossing the border amounts to a “direct invasion” by Russia. On Thursday, Ukrainian officials said border guards had begun checking the 200-truck Russian aid convoy that has been stalled at the border for days, waiting for permission to enter the country.

The convoy had been waiting at the border for a series of formal steps to be completed, including inspection by the Red Cross.

Ukraine sceptical
The Kyiv government, which accuses Russia of arming and otherwise supporting the rebels, has voiced suspicions that Moscow is using the convoy as a pretext for a full-scale invasion. Moscow on has called the accusation “absurd.”

On Wednesday, Ukraine’s national security spokesman Andriy Lysenko said troops have reclaimed control of the eastern city of Ilovaysk after heavy fighting with pro-Russian separatists. The town is strategically important because of its roads and rail line.

Lysenko told reporters he cannot say that the city is “freed of terrorists,” but said Ukrainian forces have managed to “enter the town completely.” But, he added, rebel fighters continue to launch counter-attacks against troops in the area.

Ukrainian commanders also say they are surrounding Donetsk, a rebel stronghold, and fighting also continues in the province of Luhansk, near the border with Russia.

Also Wednesday, Lysenko told reporters a Ukrainian SU-25 single-seat fighter jet was shot down in the rebel-held Luhansk region. The identity of the shooters and the fate of the pilot are unknown.

Belarus meeting
Ukraine’s president, Petro Poroshenko, is set to attend a meeting next week with his Russian counterpart, Vladimir Putin, to address the crisis in eastern Ukraine.

Poroshenko’s office described the August 26 summit in Belarus as an effort aimed at “stabilizing the situation in Ukraine.”