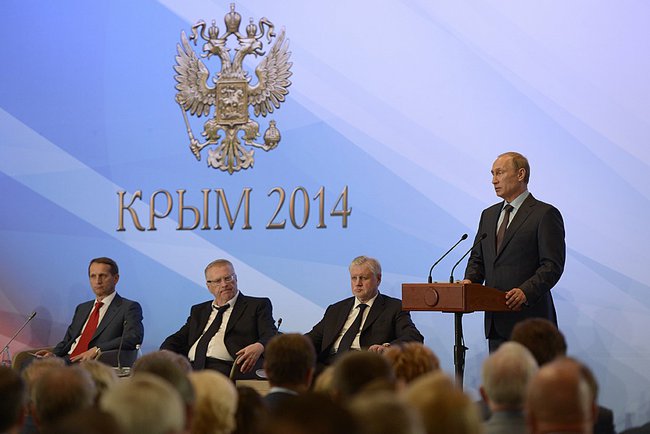 Russian president Vladimir Putin says his country will do everything in its power to stop the conflict in eastern Ukraine raging between pro-Russian separatists and Ukrainian armed forces. But the Russian leader’s remarks ring hollow in Ukraine, where many blame Moscow for stoking tensions between the two countries.

In an out-of-town address before Russian lawmakers Thursday, President Putin expressed his concern about the growing crisis in eastern Ukraine, saying the country has fallen into “chaos” and warning of a major “humanitarian catastrophe.”

Ukrainian leaders and many Western governments have accused Russia of send fighters, weapons and supplies into eastern Ukraine through the porous parts of the border between the two countries.

Even the location of Putin’s speech – he spoke in Crimea mainly before Russian Duma members who travelled with him to the peninsula Russia annexed from Ukraine in March – has angered officials in Kyiv, who insist the region remains part of Ukraine.

In a further escalation of tensions, a convoy of some 300 Russian trucks said to be carrying relief aid to residents of Ukraine’s east is now said to be nearing a part of the border controlled by rebels.

Ukraine and its allies have voiced suspicion that the Russian humanitarian convoy could be a guise or create a pretext for further military intervention in the east.

In the small Ukrainian town of Volchansk, near the Russian border, some residents, like Alexander Kutsenko expressed doubts about Russia’s intentions. “I think it’s extremely cynical, he said, “for Russia to be killing our people in the east and then to send humanitarian aid,” he said.

Russia says it is shipping nearly 2000 tons of baby food, medical supplies, water and other relief items to the residents of the Luhansk region, which borders Russia and remains largely controlled by separatists.

Ukrainian officials have said they would not allow the trucks to enter Ukrainian territory, but would permit the items to be distributed through the Red Cross.

Moscow claims it is coordinating the delivery through the Red Cross. The aid agency said on its official Twitter feed Thursday it has made contact with the Russian convoy, but that “many practical details are still to be clarified.”

Back in Volchansk, a doctor from Luhansk said she had to leave the region as the situation deteriorated. Larisa Zhatova said it felt “like the whole world had crashed on us” and that the people of eastern Ukraine need assistance, no matter where it comes from.

“I think people of goodwill,” she said, “including Russia, should give help not only to Luhansk, but to everyone in Donetsk, Kramatorsk, Slovyansk, to help them survive.”

The Red Cross has said thousands of people are in need of assistance in areas of Donetsk and Luhansk regions, where the Ukrainian military says it is closing in on the remaining separatist strongholds, and has stressed that aid delivery should not be politicised.

Yanukovych: ‘I will return to Kyiv’