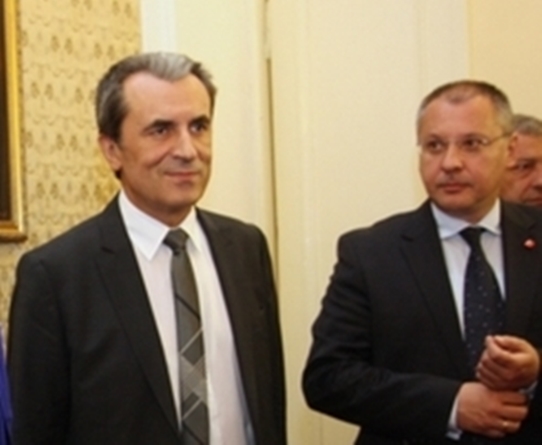 Clarity on when Bulgaria’s cabinet will resign came a small step closer on July 2 when Plamen Oresharski, occupant of the prime minister’s chair in the Bulgarian Socialist Party cabinet, said that he would choose a moment at the end of July to step down.

An early parliamentary election date of October 5 is already confirmed, as is August 6 as the date on which the 42nd National Assembly will be dissolved.

But the date on which the cabinet will resign, to make way for a caretaker cabinet ahead of the elections and to hold stewardship of the country until a new government is formed, remains a matter of speculation.

Oresharski said that he hoped he would be able to hold consultations with the new President of the European Commission, who is to be elected on July 15.

Apart from political considerations, such as decisions made by the parties that put the current cabinet in place in May 2013 – the BSP and the Movement for Rights and Freedoms – consitutional and electoral law timeframes suggest that the latest possible date for the resignation of the cabinet is July 25.

A special European Council meeting is to be held on July 16, and the cabinet is preparing to put forward the nomination of Bulgaria’s European Commissioner, according to Oresharski.

These dates, taken together, suggest a resignation date between July 16 and 25.

“The only thing I’m worried about is whether there will be a quorum (in Parliament) when I resign,” Oresharski said.

He was speaking after the July 2 sitting of the National Assembly was cut short for lack of a quorum, meaning that a scheduled prime minister’s question time had to be cancelled.

Earlier, ultra-nationalist far-right party Ataka, which since May 2013 generally has been the party to provide the ruling axis with a quorum in Parliament to hold proceedings, said that it would not return to the National Assembly before Parliament was prorogued for the early elections.

Should Volen Siderov’s Ataka keep to this promise, it would mean that achieving a quorum would be dependent on the presence of the National Assembly’s largest party, Boiko Borissov’s centre-right GERB. (And if opinion polls are correct, it would also mean that Parliament would be free of the sight and sound of Siderov’s party, there since 2005, re-elected in 2009 and 2013, but seen by pollsters as having no chance of returning to the 43rd National Assembly.)

On July 2, Borissov said that his party would formally register at sittings to provide a quorum provided that the agenda of the day was one with which it agreed.

Meanwhile, the fate of Bulgarian Socialist Party leader Sergei Stanishev continues to remain unclear, after the rising tide of resentment against him within the party after he led the BSP to its latest defeat, in the European Parliament elections, and after he broke his oft-repeated promise not to take up a seat as an MEP if elected.

Stanishev’s resignation as an MP was accepted by the National Assembly on June 27, enabling him to take up his seat – one of four won by the BSP, out of 17 allocated to Bulgaria in the newly-elected European Parliament.

Not only do Stanishev’s ambitions to become Bulgaria’s European Commissioner appear to be a dead letter, it emerged on July 1 that he was not being given the post of leader of the Socialists and Democrats Group in the European Parliament, vacated by Martin Schulz when Schulz was elected European Parliament President.

There had been suggestions in the media that Stanishev would become group leader of the main socialist group in the European Parliament, given that he is the leader of the Party of European Socialists.

Instead, the political group leader’s post went to Italy’s Gianni Pittella. Stanishev also is not among the nine vice-presidents of the political group, and thus not a member of the Socialists and Democrats’ bureau in the European Parliament. Nor did Stanishev win a nomination or election to one of the vice-president of the European Parliament posts.

It remains an open question whether Stanishev would even be elected to the chairpersonship of one of the European Parliament’s committees.

Several Bulgarian media reports on July 2 said that pressure was mounting on Stanishev to step down as leader of the BSP.

A plenum of the party is to be held on July 5, having been postponed earlier. Separate reports suggested that this July 5 meeting might produce agreement to hold a special party congress later in the month, which could see the leadership issue tackled, or if that did not happen, Stanishev might step down at the BSP’s traditional anniversary gathering at Mount Buzludzha on August 2.

Civil defence sirens to be tested in Sofia, several other cities in Bulgaria on April 1 2019