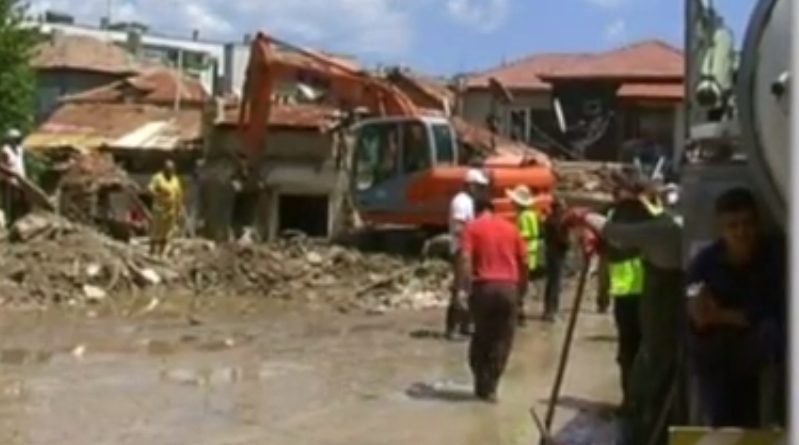 A group of Syrian refugees is among volunteers who have joined in cleaning up the Asparouvo area of Bulgaria’s Black Sea city of Varna, which was devastated in deadly floods on June 19.

“You have to reach out to one another. As the Bulgarian people lent a hand to refugees, so we must return the gesture,” a Syrian refugee identified in local media reports as Mohammad said.

“We will stay as long as we are needed,” he said. “Solidarity is the law of humanity.”

Varna municipality issued a new appeal on June 23 for volunteers. This past weekend, there were about 1000 volunteers – mainly young people, from all over Bulgaria – helping to clear the area, but the figure dropped at the start of the week as people returned to their jobs.

About 30 buildings in the area need to be reinforced or demolished. On June 23, Varna municipality issued compulsory evacuation orders to about 68 households, not only because of existing damage to their housing but also because of concerns about a further risk of heavy rain later this week.

On June 24, relatives of six-year-old child Marin Marinov, who has been missing since the deluge of June 19, blocked the Asparouhov Bridge in Varna in protest because of their frustration about a lack of information about the fate of the boy.

According to a report by public broadcaster Bulgarian National Radio, the relatives wanted President Rossen Plevneliev to come back to the area. Relatives said that they spoke with Plevneliev during his visit to Varna on June 21 and he promised that there would be assistance, “but we see no such assistance”.

On June 23, the corpse of a three-year-old girl was found. She had been one of two children, Marin Marinov being the other one, missing since the floods.

While volunteer teams continued draining the most seriously affected buildings on June 24, officials from Varna municipality were continuing inspecting damage to buildings in the neighbourhood.

Bulgaria’s Interior Minister Tsvetlin Yovchev told Nova Televizia on June 24 that assistance from Bulgaria’s disaster relief fund could be expected, but not covering the entire damage.

“This fund does not have such functions, and nor does it have that kind of money. In this case, the responsibility falls on people, they should insure their property,” Yovchev said.

He said that Fire Safety and Civil Protection Directorate teams were helping the local authorities in the damages assessment so as to allocate aid to the affected people.

Yovchev insisted that the state had done everything within it means and power since the very start of the floods.
This claim by Yovchev came against a background of critical reports in some media.

On the night of June 23, popular satirical nightly television show Gospordari na Efira, in a departure on Bulgaria’s national day of mourning from its customary comedic style, compiled a biting report contrasting claims by Bulgaria’s government ministers – including Yovchev – who had told reporters that they had no forewarning of the floods, with weather forecasts from the three major television channels that for three days in advance had warned of dangerous rain.

The show also interviewed weather forecasters who showed that they had submitted dangerous weather warnings to government institutions, days in advance of the deluges in Dobrich, Varna and other parts of Bulgaria’s Black Sea coast.