Bulgaria’s Finance Ministry has reported that the consolidated Budget deficit for the first four months of 2014 was 864.5 million leva, or 442 million euro, tripling in size compared to the same period of last year.

In April, the consolidated Budget reported a surplus of only 9.5 million leva (compared to 509.2 million leva in April 2013), even though traditionally Budget revenue gets a boost from income tax receipts – the last day of April is the annual deadline for submitting income tax forms for the previous year, in Bulgaria.

Usually, the four-month data gives a clear picture of the state of public finances – in the first quarter, revenue is sluggish as a rule, but that is offset by the April boost. In 2013, for example, the deficit at the end of March was 795.6 million leva, only to fall to 286.4 million leva a month later.

This year, the boost should have been even more sizeable because the self-employed and practitioners of liberal professions were also required to pay their taxes for the last quarter of 2013 in April, as opposed to the end of the year, as was the practice previously.

But there was no such bump – mainly because of the increased social spending of the Plamen Oresharski government, while revenue collection remained roughly unchanged, the government’s critics say.

The Finance Ministry said in its statement that the shortfall in value-added tax collection, one of the main sources of revenue for the Bulgarian Budget – about 124 million leva less VAT was collected in January-April than in the first four months of 2013 – was due to the fact that the current government was carrying out its promise to rebate VAT quicker than the previous administration.

Budget spending in January-April, by comparison, rose to 10.32 billion leva, an increase of 7.8 per cent over last year, or roughly 31.7 per cent of the full-year target. In addition to increased social spending, the government was also spending more EU structural funds, which are part of the consolidated Budget, the Finance Ministry said.

Bulgaria’s cabinet targets a Budget deficit of 1.8 per cent in 2014, but the European Union’s rules allow member states to run deficits of up to three per cent – in Bulgaria’s case, about 2.4 billion leva, a figure that the government is well on track of reaching – before triggering the bloc’s budget monitoring system and excessive deficit proceedings. 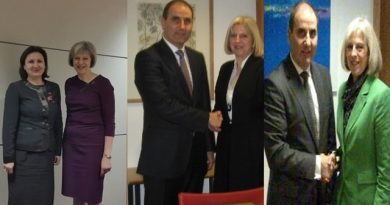 For Bulgaria, Theresa May is a known quantity