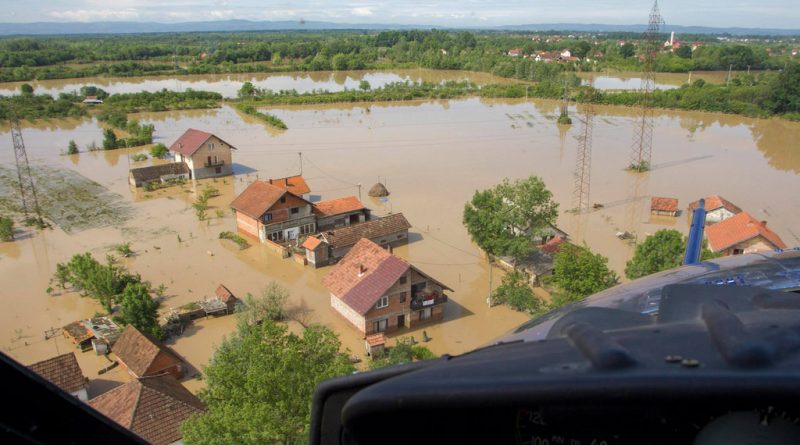 The economy in six countries in South Eastern Europe covered by a World Bank regular report began recovering from the 2012 recession, growing by 2.2 per cent on average in 2013, but the outlook for growth could be at risk from the record floods in the region in May 2014.

The six countries covered by the report are Albania, Bosnia and Herzegovina, Kosovo, Macedonia, Montenegro, and Serbia.

According to the World Bank’s latest South East Europe Regular Economic Report, the region is projected to grow at 1.9 per cent in 2014 and 2.6 per cent in 2015 thanks to growing external demand, but significant risks cloud the outlook, including the expected impact of recent flooding in the region.

Severe floods, in particular in Bosnia and Herzegovina and in Serbia, which occurred in mid-May due to unprecedented rains, caused a humanitarian crisis with dozens of people dead and millions displaced or left without access to water or power.

Housing, crops and livestock have been lost, and major transportation links have been disrupted. The floods will undoubtedly have a negative impact on growth in 2014, though it is too early to measure the full impact, the World Bank said.

Assessments of damage and reconstruction needs are being launched as initial relief operations continue.

In 2013, each of the six countries of South Eastern Europe marked positive growth rates, with growth at or exceeding three per cent in Kosovo, Macedonia, and Montenegro. In all countries, a good agricultural year and growth in industry supported the region’s economic activity.
“In 2013, South East Europe began recovering from recession,” said Ellen Goldstein, World Bank Country Director for South East Europe.

“Economic growth was possible thanks to the increased demand for regional exports from high-income countries, particularly those in the European Union (EU). The devastating floods in mid-May are a humanitarian disaster for several countries of Southeast Europe, and will impact economic recovery for the next few years in ways that have yet to be fully assessed.”

According to the report, exports grew by close to 17 per cent in 2013, led by particularly rapid growth of Serbian exports. The major increase in 2013 came from the export of machinery and transport equipment, mainly from Serbia and Macedonia.

Meanwhile, mineral fuels exports were quite significant in Albania and Montenegro, and base metals were around a quarter of exports from Kosovo in 2013.

In contrast, the region’s domestic demand contracted in 2013. Noting this, Goldstein said,“We encourage Western Balkan countries to shift from an internal demand-driven growth model to one fueled by exports, leading to greater integration in European and global markets. With recovery underway, now is the time to focus on creating an investment climate conducive to export-led growth and enhancing connectedness.”

Domestic demand was further suppressed by declining remittances to the region in 2013, reflecting a still-sluggish economic recovery and prevailing high unemployment in EU countries.

With few new jobs, falling remittances, and limited credit to the economy, household incomes and firms’ profits were unable to boost domestic consumption or investment in the region.

“Overall, while the recovery has brought growth, countries in the region are having limited success in translating the economic recovery into job creation,” said Gallina A Vincelette, lead economist and one of the authors of the report.

“Unemployment remained very high in the region at an average rate of over 24 per cent in 2013. Persistently high unemployment rates and chronic unemployment are particularly prevalent among vulnerable groups, such as youth, women, and the low-skilled.”

The report says that challenges remain and need action in the financial and fiscal sectors. Taming the high and still rising non-performing loans; resuming credit growth to viable corporate borrowers; pursuing decisive consolidation efforts to restore fiscal balance; and reducing public debt would help stimulate economic activity. To sustain growth in the region, the countries need to further strengthen their domestic macroeconomic fundamentals and policies that boost productivity and resilience to external turmoil.

In addition, the recent economic recovery is an opportunity to re-launch long-overdue structural reforms. Priorities for growth and jobs creation include macroeconomic and fiscal stabilization, improved competitiveness and connectivity, enhanced skills and labor productivity, and strengthened governance and anti-corruption.

For Kosovo, the report noted that it remains the fastest growing economy in the region and that economic growth is projected to accelerate in 2014.

Agim Demukaj, economist and co-author of the report, said that “Kosovo had a solid economic growth, but it did not create new jobs.”

Jan-Peter Olters, country manager for Kosovo, said: “In the current context, Kosovo will have to ensure that the focus of economic policy-making remains the maintenance of macro-fiscal stability, without which the country’s objective of increasing employment cannot be reached in a sustainable manner.”

(Photo, of flooded areas in Bosnia and Herzegovina, May 2014: EC/ECHO/EEAS/EU Delegation BiH)

Flood Watch Budapest: 55 000 people may have to be evacuated, PM says