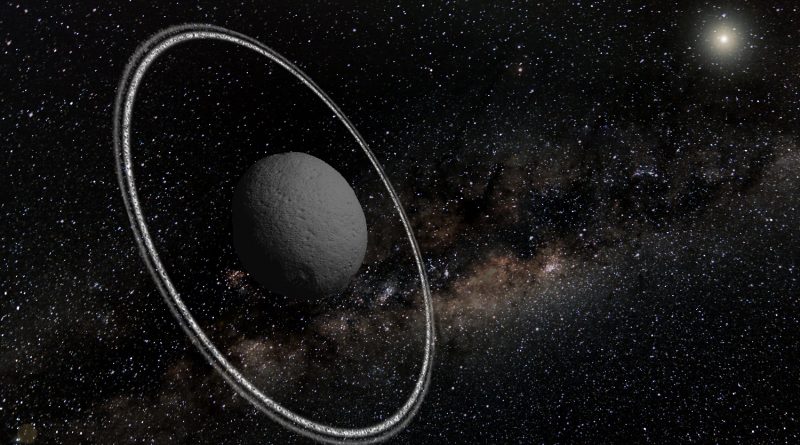 Whenever you think of a planet with rings around it, Saturn probably comes to mind first. Jupiter, Uranus and Neptune – the four outer giant planets – also have rings, but they’re not as bright, wide and colorful as Saturn’s.

However, scientists in Chile now say they’ve discovered the first miniature planet with two rings circling it. The team of astronomers, based at various South American observatories, including the European Space Organization’s La Silla Observatory, says the rings are made of ice and pebbles.

It is the first time astronomers have found rings around any of the smaller celestial objects orbiting the Sun.

The mini-planet is actually a giant asteroid called Chariklo, a celestial body known as a centaur or minor planet. It is believed to have originated in the Kuiper belt, a vast collection of icy celestial objects, but at some point was thrown out. Chariklo, which is about 250 kilometers in diameter, is currently located about 2 billion kilometers away from Earth, between Saturn and Uranus.

The star seemed to disappear for a few moments as Chariklo blocked its light by passing in front of it, an event known as occultation. The astronomers also noted two very short dips in the star’s apparent brightness: First, a few seconds before, and then again a few seconds after, the star’s light was blocked by the centaur.

These observations led the astronomers to believe that something surrounding the small celestial object was blocking the light.

After comparing notes from different observational sites, the team was able to recreate not only the shape and size of Chariklo itself, but also the shape, width, orientation and other properties of its rings.

“We weren’t looking for a ring and didn’t think small bodies like Chariklo had them at all, so the discovery and the amazing amount of detail we saw in the system came as a complete surprise,” said Felipe Braga-Ribas of Brazil’s National Observatory in Rio de Janeiro, who planned the observation campaign and is lead author on the paper published in Nature.

“For me, it was quite amazing to realize that we were able not only to detect a ring system, but also pinpoint that it consists of two clearly distinct rings,” said team member Uffe Gråe Jørgensen of the University of Copenhagen. “I try to imagine how it would be to stand on the surface of this icy object, small enough that a fast sports car could reach escape velocity and drive off into space, and stare up at a 20 kilometer wide ring system 1,000 times closer than the Moon.”

Scientists at the Niels Bohr Institute at the University of Copenhagen developed a special high resolution-camera for the 1.54 meter Danish telescope at La Silla that, according to Jørgensen, played a key role in making the discovery.

Scientists don’t know for sure how the two rings surrounding Chariklo formed but Jørgensen has a theory.

“What we are witnessing is perhaps the unveiling of an object that is in the middle of the same stage of development as the Earth and the Moon 4.5 billion years ago, when there was a giant collision between Earth and another planet,” he said. “In the collision, material hurled out in all directions, forming a circular disc around the Earth, which gradually condensed and formed the Moon. Similarly, we believe that another celestial body crashed into Chariklo and a good deal of material was cast out and formed rings. If the two discs around Chariklo gather and form a moon, it will be approximately 2 kilometers in diameter.”

The project leaders have given the two rings temporary nicknames, Oiapoque and Chuí, after Brazilian rivers. 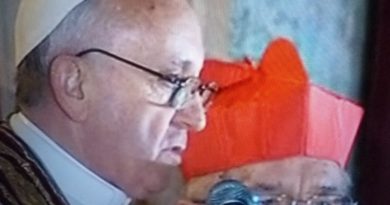