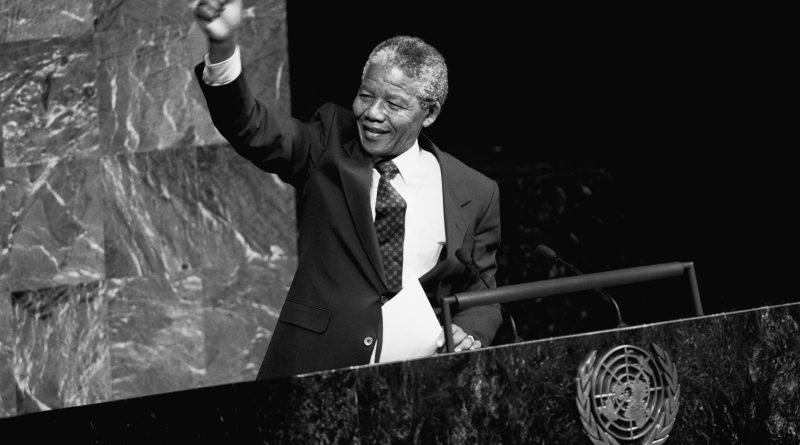 From around the world, tributes began to pour in soon after the news of the death on December 5 2013 of Nelson Mandela, South Africa’s first democratically-elected president and a global inspiration.

Mandela’s death was announced by current president Jacob Zuma, who said in a live television broadcast, “Our nation has lost its greatest son. Our people have lost a father.”

“Our thoughts are with the millions of people across the world who embraced Madiba as their own and who saw his cause as their cause.  Our nation has lost his greatest son.  Yet what made Nelson Mandela great was precisely what made him human.  We saw in him what we seek in ourselves and in him we saw so much of ourselves,” Zuma said.

United Nations  Secretary-General Ban Ki-moon expressed his profound sadness at the passing of Mandela, extolling the life of the late human rights lawyer, prisoner of conscience, international peacemaker and first democratically-elected president of post-apartheid South Africa as an inspiration for all.

“Nelson Mandela was a giant for justice and a down-to-earth human inspiration,” Ban said at UN Headquarters in New York.

“On behalf of the United Nations, I extend my deepest condolences to the people of South Africa and especially to Nelson Mandela’s family, and indeed our global family.”

Ban noted that many people worldwide were greatly influenced by Mandela’s selfless struggle for human dignity, equality and freedom. “He touched our lives in deeply personal ways. At the same time, no one did more in our time to advance the values and aspirations of the United Nations.”

“Nelson Mandela showed what is possible for our world and within each one of us – if we believe, dream and work together for justice and humanity,” Ban said.

United States president Barack Obama said that Mandela embodied the “promise of change for the better”.

“Through his fierce dignity and unbending will to sacrifice his own freedom for the freedom of others, Madiba transformed South Africa – and moved all of us,” Obama said.

“His journey from a prisoner to a President embodied the promise that human beings – and countries – can change for the better.”

Mandela’s commitment to transfer power and reconcile with those who jailed him “set an example that all humanity should aspire to, whether in the lives of nations or our own personal lives,” Obama said.

“And the fact that he did it all with grace and good humour, and an ability to acknowledge his own imperfections, only makes the man that much more remarkable.  As he once said, ‘I am not a saint, unless you think of a saint as a sinner who keeps on trying’,” Obama said.

In a Twitter message, European Commission President Jose Barroso said that Mandela had changed the course of history for his people, country, continent and the world.

European Council President Herman van Rompuy said in a tweet that Mandela was one of our times’ greatest political figures.

“Let’s honour his memory by commitment to democracy and tolerance,” Van Rompuy said.

In a subsequent joint statement, Van Rompuy and Barroso said, “this is a very sad day not only for South Africa, but for the entire international community. We mourn the death of one of the greatest political figures of our times. Nelson Mandela was not only key in transforming South Africa into the democratic country it is today.

“He represents justice, freedom and respect for human rights. He taught us all a major lesson in reconciliation, political transition and social transformation. Only a person with his profound humanity, moral integrity and authority and clear vision for the future of his country, could have achieved this.

“While we grieve today, there is no better way we can honour his memory than by reaffirming our collective commitment to uphold the values of true and deep democracy for which Nelson Mandela fought tirelessly.

“On behalf of the European Union, we convey our most heartfelt condolences to his family and to the government and people of South Africa,” the joint statement said.

UK prime minister David Cameron said : “A great light has gone out in the world. Nelson Mandela was a hero of our time”.

“Our nation has lost a colossus, an epitome of humility, equality, justice, peace and the hope of millions, here and abroad,” African National Congress secretary general Gwede Mantashe said.

“He loved the ANC. Hence his frequent words that upon his death he would join: ‘the nearest branch of the ANC in heaven’,” Mantashe said.

Anglican Archbishop of Cape Town Emeritus Desmond Tutu said that Mandela “was not only an amazing gift to humankind, he made South Africans and Africans feel good about being who we are. He made us walk tall. God be praised.”

Former South African president FW de Klerk, who along with Mandela shared a Nobel Peace Prize, said that Mandela’s death was a very sad moment for all of South Africa.

He “did not only talk about reconciliation, he lived reconcilation, he was a great unifier,” De Klerk said.

Thabo Mbeki, Mandela’s successor as president of South Africa, said that Mandela’s death signals the end of an historic era represented by the heroic deeds of his generation.

“Thus, President Mandela’s departure demands of those of us who remain, South Africans and all Africans on the rest of our Continent, that we commit ourselves selflessly to address the many challenges we face,” Mbeki said.

Mandela and his generation discovered the mission of their generation. They were at all times faithful to it, as a result of which they fulfilled it, he said.

“As we mourn President Mandela’s passing we must ask ourselves the fundamental question – what  shall we do to respond to the tasks of building a democratic, non-racial, non-sexist and prosperous South Africa, a people centred society free of hunger, poverty, disease and inequality, as well as Africa’s renaissance, to whose attainment President Nelson Mandela dedicated his whole life?,” Mbeki said.

Helen Zille, leader of the opposition Democratic Alliance and prime minister of the Western Cape, said: “Let all South African join hands as we mourn Madiba’s passing and celebrate his life”.

Irish prime minister Enda Kenny said that the name Mandela “stirred our conscience and our hearts. It became synonymous with the pursuit of dignity and freedom across the globe”.

Australian prime minister Tony Abbott said that Nelson Mandela will forever be remembered as “more than a political leader, he was a moral leader”.

Mandela spent much of his life standing against the injustice of apartheid, Abbott said.

“When that fight was won, he inspired us again by his capacity to forgive and reconcile his country.

“While the world may never see another Nelson Mandela, he has inspired countless men and women throughout the world to live more courageous and honest lives,” Abbott said.

US former president Bill Clinton said that the world had lost one of its most important leaders and one of its finest human beings.

“And Hillary, Chelsea and I have lost a true friend.”

History will remember Nelson Mandela as a champion for human dignity and freedom, for peace and reconciliation, former president Clinton said.

“We will remember him as a man of uncommon grace and compassion, for whom abandoning bitterness and embracing adversaries was not just a political strategy but a way of life. Our thoughts and prayers go out to Graça and his family and to the people of South Africa.

“All of us are living in a better world because of the life that Madiba lived. He proved that there is freedom in forgiving, that a big heart is better than a closed mind, and that life’s real victories must be shared,” Bill Clinton said.

The Voice of America reported that Israeli prime minister Benjamin Netanyahu called Mandela a man of vision who rejected violence and was one of “the most honourable figures of our time.”

Bulgarian President Rossen Plevneliev said in a condolences letter that “rarely has humanity been so united in its grief. Nelson Mandela embodied the strength of the human spirit, irreconcilability towards injustice and an unceasing faith in everything good. He will remain in history as a great son of his country, of Africa, of humanity; an example to follow and a body of work that we must continue together.”

The BBC reported that Idris Elba, the British actor who plays the lead in the new biopic Mandela: Long Walk to Freedom, said: “What an honour it was to step into the shoes of Nelson Mandela and portray a man who defied odds, broke down barriers, and championed human rights before the eyes of the world. My thoughts and prayers are with his family.”