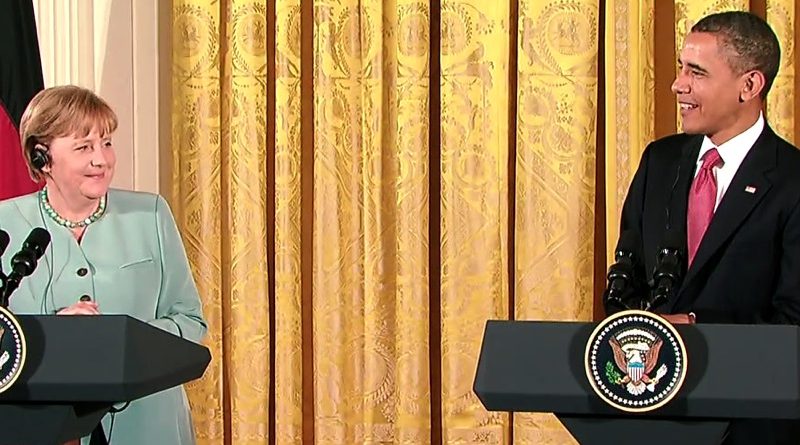 Europe
October 26, 2013October 26, 2013 Mil Arcega of VOANews
Allegations that the U.S. National Security Agency collected millions of phone records across the Atlantic and tapped cell phone communications by world leaders, have overshadowed a meeting of European leaders in Brussels. Some say the allegations have shattered their trust in the Obama administration. Others say the revelations undermine the crucial trans-Atlantic relationship and could complicate trade negotiations between two of the world’s biggest economic blocs. VOA’S Mil Arcega reports.The size and reach of the alleged NSA surveillance have outraged European leaders. French President Francois Hollande called it “unacceptable.” German Chancellor Angela Merkel – whose cell phone was allegedly tapped by the U.S. – said her trust has been severely shaken. And at an E.U. gathering in Brussels, Germany’s Foreign Minister Guido Westerwelle demanded the truth.

“For us, spying on close friends and partners is totally unacceptable. This undermines trust and this can harm our friendship,” said Westerwelle.

The White House has denied the most serious charges, saying the United States is not monitoring and will not monitor the German leader’s communications.  But less clear is whether it did so in the past.

Unless Americans prove the allegations untrue, Schulz recommends suspending talks on a two-way free trade agreement between Europe and the United States. European leaders have downplayed those remarks.

“I think what will happen is the whole issue of data privacy, which is something the French have been pushing very hard, will now become a much more tougher issue. The Germans have been much more open to having an agreement on data privacy and I think this is going to make it more difficult,” said Szabo.

U.S. trade officials insist conversations regarding N.S.A. surveillance be handled separately from trade negotiations. Szabo said the controversy, though, could give European companies the upper hand.

“It’s bad news for American companies, IT companies like Google and Apple and so on, because now you have the European, the German firms saying – ‘go with us because we can protect your data.’ So it is going to hurt, it’s going to cost billions of dollars to American companies.”

Experts say a Trans-Atlantic trade pact could be the biggest bilateral trade deal in history, representing half of the world’s total economic output and about 30 percent of global trade.