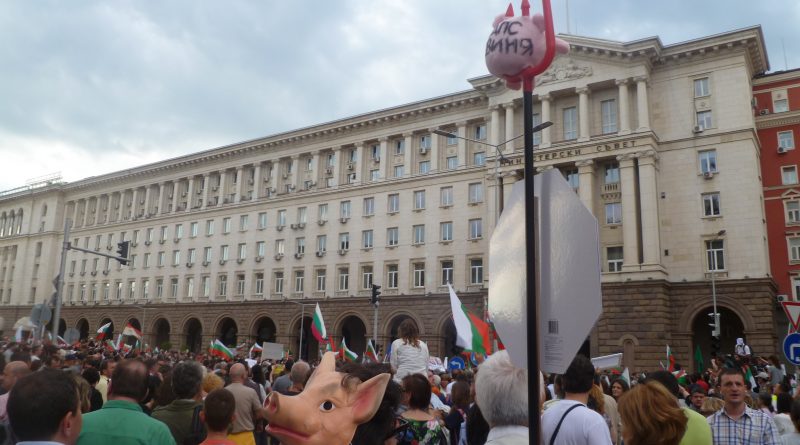 Bulgaria’s anti-government protesters reacted to unconfirmed media reports that the Constitutional Court had said that Delyan Peevski was still an MP by calling for a mass turnout for evening protests.

It was Peevski’s appointment in June as head of the State Agency for National Security that sparked huge public support for calls for the Bulgarian Socialist Party government to resign, on the grounds that it had become utterly discredited.

In the face of widespread public indignation at the appointment, the BSP government, which remains in place with the support of the Movement for Rights and Freedoms and the tacit support of ultra-nationalists Ataka, withdrew Peevski’s appointment.

In the four days between his election in Parliament by BSP and MRF MPs, Peevski took the oath in the National Assembly as head of SANS, gave an interview in that capacity, held meetings with heads of SANS departments and with the Prosecutor-General, Sotir Tsatsarov.

The argument of those who held that he remained an MP was that his departure as an MP had not been voted on by the National Assembly, while Peevski said that he had taken no action as head of SANS. He was invited to attend a Constitutional Court sitting on the matter on October 8, but declined to come, alleging that he had been demonized in what he portrayed as a conspiracy among certain political, business and media circles (a charge to which critics responded with bitter hilarity, considering the media holdings of the family of which Peevski is a member).

On October 8, several Bulgarian media – among them state-owned news agency BTA – quoted unidentified reliable sources at the court as saying that the court had turned down the petition filed by 96 MPs against Peevski still being an MP. Reportedly, five judges had voted in favour of his no longer being an MP, six had opposed and one had written a dissenting opinion.

Organisers of the DANSWithme group called the reported decision by the Constitutional Court “capitulation to the mafia”.

The anti-government Protest Network called for a mass turnout of protests on this topic starting from 7pm on October 8. Already, anti-government protests have continued for 117 consecutive days.

“For more than 100 days we have been defending our request for basic equality before the law and justice, to throw overboard the caste of untouchables, those who never fall from power.”

Extra-parliamentary group the Reformist Bloc, a working alliance of a number of centre-right parties, described the Constitutional Court decision as “absolutely unacceptable from a legal and political perspective”.

The decision had “legalised the arbitrariness of the majority in the National Assembly , which may take and go back on their decisions on political appointees without any consideration of the meaning of the law and the constitution,” the Reformist Bloc said

“By this act, it is clear that the main exponent of the Bulgarian state and defender of civil rights and democracy is dependent on political and economic interests. Obviously the impact of these vested interests who exercise public power in Bulgaria and destroy law and democracy, has already extended to the supreme institution of choice to protect the Constitution and the state,” the Reformist Bloc said, reiterating its call for the resignation of the government supported by the BSP, MRF and Ataka.