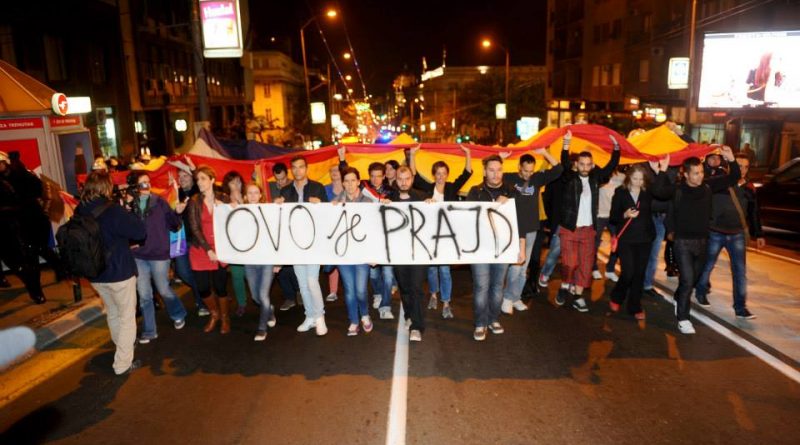 A group of hundreds of protesters held a rapidly-organised demonstration against the ban by the Serbian government of the Belgrade Pride Parade 2013, imposed with prime minister Ivica Dačić saying that “no one could guarantee a safe holding of the parade”.

The Belgrade Pride Parade had been planned for September 28.

As had happened with similar Pride Parade plans in previous years, there were threats and plans for counter-protests against by far-right and other extremists.

The most recent Pride parade, in 2010, saw clashes after attacks by ultra-nationalists.

Plans for the parade also had, as has been customary, drawn objections from the Serbian Orthodox Church.

The day before the parade, the Bureau for the Coordination of the Security Services, after a three-hour meeting, announced that the parade was being banned.

Dačić told local media that this did not mean “a capitulation to hooligans” but there were threats to peace and security and no one could guarantee a safe holding of the parade.

A few hours after the ban was announced, several hundred LGBT activists marched in Belgrade in protest against the decision, chanting, “we won’t give up!”

Among stops in the march were the prime minister’s office and parliament. Activists chanted, “This is pride” and “This is Serbia”.

European Commissioner for Enlargement and Neighbourhood Police Štefan Füle said that he “regretted” the decision by the Serbian authorities to ban the Belgrade Pride Parade 2013.

He noted that this was the third year in a row that such a ban had been imposed, on security grounds.

“It is a missed opportunity to show respect for fundamental rights,” Füle said.

“The march would have been the closing event of a successful full week dedicated to LGBTI population rights. I have been closely monitoring the situation over the past days, in close contact with the EU Delegation in Belgrade and with members of the European Parliament as well as representatives from EU member states.

“As Commissioner for the EU Enlargement policy, I am committed to seek from candidate countries that they fully embrace values such as freedom of assembly and freedom of expression that are amongst the core foundations on which the European Union project is built upon. This is particularly important in the context of Serbia’s accession negotiations, in the framework of which this week the screening of chapter 23 on judiciary and fundamental rights was successfully held.”

The European Commission would continue to support Serbia’s efforts in developing a climate of tolerance and respect conducive to every citizen being treated without discrimination on the basis of gender, racial or ethnic origins, religion or belief, sexual orientation, disability and age, in line with the EU Treaties and Charter for Fundamental Rights as well as the June 2013 Conclusions of the Council on LGBTI rights, Füle said.

He said that the EC expects the government of Serbia to take all necessary steps to investigate threats of violence directed against the Parade and take necessary measures to ensure that the rights to freedom of assembly and expression are fully respected in the future. 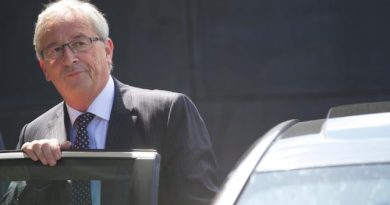